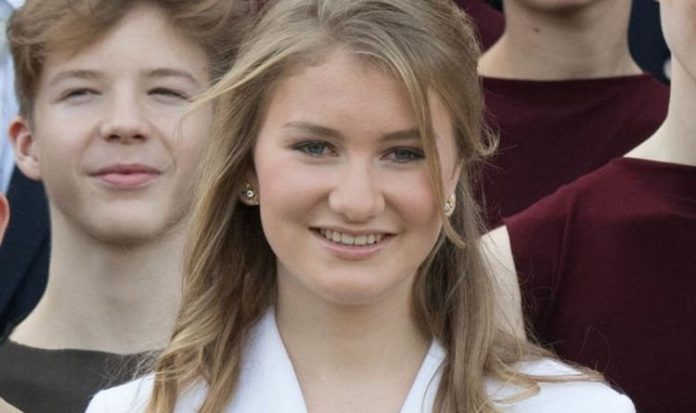 Princess Elizabeth of Belgium has followed in her father’s footsteps as she started the Royal Military Academy in Brussels. The eldest daughter of King Philippe and Queen Mathilde of the Belgians joined 169 first-year students at the academy. Much like her father and most Belgian officials, the Duchess of Brabant will receive a stern military education at the school.

However, the coronavirus pandemic has brought a few changes in the institution.

Instead of sleeping in a dormitory, the princess and her fellow classmates will have individual rooms.

When attending classes, the students have permanent seats and a plexi screen installed between them.

Mealtime won’t see many students socialising but, rather, pupils divided into smaller and permanent groups.

Princess Elizabeth’s first day at the academy on August 31 started at 9am sharp, when pupils received their kit consisting of the army uniform, masks, a sleeping bag, black shoe polish, a pocket knife, a headlamp and a few other essentials.

Colonel Thierry Pirenne, director of the training office, welcomed the cadets explaining what they are facing over the next months.

He said: “Becoming an officer is not an obvious choice, it is a real challenge.”

After the introductory session, the Duchess of Brabant started, on September 2, her military initiation phase at Camp Elsenborn.

The Duchess graduated at UWC Atlantic College this summer, but could not attend in person the second half of her sixth form because of the lockdown.

This college was founded in the 1960s by German educator Kurt Hahn – who in 1934 also launched Gordonstoun School, of which Prince Philip is a proud alumnus.

Princess Elizabeth is much beloved in Belgium, but her popularity also rose across Europe after her 18th birthday became a national affair.

Celebrations held at the royal palace were broadcasted across the country in October last year.

Hundreds of people were invited to the event, including politicians, fellow royals and 80 young Belgians also celebrating their 18th birthday in 2019.

Princess Elizabeth is the heir apparent to the throne in Belgium (Image: EXPRESS)

On the day, Princess Elizabeth pledged to serve her country.

She said: “Eighteen years… A step that I take with great optimism.

“I realise that I still have a lot to learn.

“I will also focus on that in the coming years: trying to understand the world better – and helping to improve it, by giving the best of myself.”

The young royal added: “The country can count on me.”

Princess Elizabeth’s positive influence on Belgians when it comes with style and fashion has been compared to the so-called Kate’s effect, which sees most of the accessories and clothes chosen by the Duchess of Cambridge to go sold out.

Just recently, Princess Elizabeth indirectly supported a brand of sportswear, Liebaert Textiles, which reported double the orders after the young heir to the throne was spotted wearing a pair of this Belgian brand leggings.

Camille Liebaert, the designer behind Liebaert Textiles told The Brussels Times: “I woke up at 7 am on Wednesday morning and immediately had a few messages from people who had forwarded the front page of a number of newspapers.

“Everyone was very enthusiastic.

“I didn’t really realise the impact at the time, but at the end of the day couldn’t get over it.

“It was all very overwhelming.”