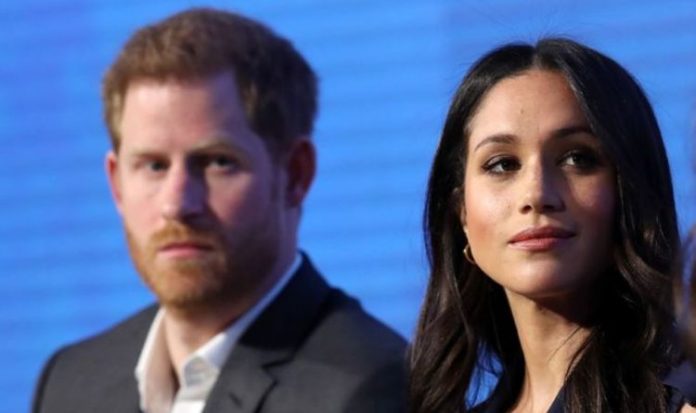 Meghan Markle and Prince Harry are planning to release an honours list with their charity Archewell, reported at the weekend. This resulted in a backlash from some royal fans who accused the Duke and Duchess of Sussex of attempting to rival the Queen’s honour list. Meghan and Harry have since responded to these claims and insisted their honours list is not intended to rival the Queen’s.

Commentator Darren Grimes reflected on this on his YouTube channel Reasoned and warned that Prince Harry needs to be careful not to lose himself in these new endeavours with wife Meghan.

Mr Grimes said: “Meghan Markle and Prince Harry have kept their royal titles and privileges and are using them to suggest they can bestow honours upon people like they are reigning monarchs of a nation themselves.

“Prince Harry has exchanged simple principles of duty to Queen and country.

“I am sorry but they gave up their privileges and the monarchy and last time I checked, America does not have one so who do they think they are to dish out these privileges.

DON’T MISS: Meghan and Harry hit back at claims they want to rival Queen’s honours

“What honour system are they relying on here?”

Mr Grimes then highlighted his concern that Prince Harry is starting to become lost.

He said: “They said they left their royal duties for a more private life, my God, they have a funny way of going about it don’t they.

“Prince Harry, I am afraid folks, could well be lost to us.

“More importantly I think he is starting to be lost to himself.”

Mr Grimes added: “It is clear to me that this is Meghan and Harry not wanting to be outdone.

“Now that they have said goodbye to their royal duties at home they have decided to issue out their own honour system.

“Who does this royal couple think they are?”

In response to the criticism, Archewell’s press secretary Toya Holness said: “We look forward to sharing more about Archewell’s work in the weeks ahead, but any suggestion that it is intended to rival the UK honours list is false.”

newspaper also claimed Meghan and Harry would celebrate leaders in a wide range of fields they care about including mental health and the environment.

Firms, charities and individuals could expect to be celebrated by the Royal couple in their Archewell honours list.