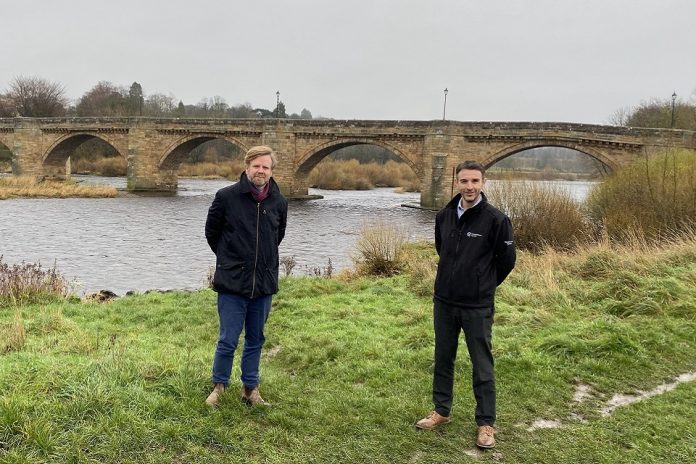 The Environment Agency has invested £10million to improve flood defences since Storm Desmond wreaked havoc across Northumberland five years ago.

And over the next six years it will spend a further £10million to better protect local communities in the Tyne Valley, the most affected area in the North East, as part of a £272million programme of work which will protect 15,000 homes across the region.

In the immediate aftermath of Storm Desmond, which resulted in some of the highest river levels on the River Tyne since 1771, emergency repair work was also carried out to ensure communities were immediately protected as part of a £3 million government recovery package for the North East.

The Environment Agency’s Tristan Drought, from the Flood and Coastal Risk Management Team in the North East, said:

I remember vividly the devastating impact Storm Desmond had on Tyne Valley communities when record-breaking rainfall led to some of the highest river levels ever recorded on the Tyne.

Together with our partners and local communities, we have worked tirelessly since then to better protect homes, businesses and infrastructure in the Tyne Valley and Ponteland.

By working collaboratively with local people we’ve been able to identify solutions together and create climate resilient communities. The £20million investment we’ve secured means that we can safeguard the local economy and better protect 15,000 properties across the North East.

We can never completely eradicate the risk of flooding, however, with climate change already causing more frequent, intense flooding, it’s important that people are flood resilient. Being prepared is key – people who live in a flood risk area need to know what to do in a flood. This is absolutely vital.

People should go online at gov.uk to check their flood risk, sign up to receive Flood Warnings and prepare a Flood Plan to keep their family safe and protect their belongings.

As the local councillor and Northumberland’s representative on the Regional Flood and Coastal Committee I see first hand the great work the Environment Agency is doing improving flood defences in Corbridge and right across the county.

They work closely with the Northumberland County Council Flood Team and together have brought peace of mind to many people.

Five years on from the devastation of Storm Desmond, it is great to look back at the progress we have made – from Tyne Green to Ponteland – to prevent future flooding across Tynedale.

Of course, there is always more work to do. I am looking forward to seeing work start on new flood defences in Corbridge, as well continued engagement with local residents, parish councils, and the Environment Agency through my Flood Forum. We must continue to do all we can to protect and defend our local communities from the devastation that flooding can cause.

This week (wc 7 December), work has started on a £1million scheme in Corbridge to strengthen the existing flood defences on the South Bank of the River Tyne and Devil’s Water to protect 37 homes. The Environment Agency is also looking at the possibility of installing property level resilience measures at some homes in the town

The town was one of the worst affected places in the North East during Storm Desmond, which devastated communities across the country in early December 2015.
Corbridge saw 55 homes flooded as the River Tyne experienced some of the highest river levels since 1771 following record rainfall.

In Acomb, work is ongoing extend and raise the existing defences and make improvements to the main road bridge, to better protect 32 homes. The Environment Agency is also working with landowners and the Tyne Rivers Trust to develop options for additional flood water storage capacity upstream of the town, which would have the added benefit of restoring habitats for local wildlife.

In Hexham, design work is taking place for a project which will reduce flood risk from the River Tyne to up to 90 homes and businesses at the town’s Bridge End and Tyne Mills Industrial Estates. It’s hoped construction will start in Spring 2021. The project received a £1million government funding boost towards its £4.1million cost from a £170million pot for ‘shovel-ready’ flood schemes announced in July.

Elsewhere in Northumberland, Ponteland flood scheme – which received £450,000 towards it’s £3million cost from the same £170million pot of funding– started in August and is due to be completed in the Spring to better protect 265 homes in the town.

This builds on work carried out by Northumberland County Council over the summer to reduce surface water flood risk to 29 properties as part of highway improvements to Callerton Lane.

Other ongoing projects include:

Since the impacts of Storm Desmond the Environment Agency and partners at local authorities have introduced Flood Community Engagement Officers to work directly with communities at risk to improve their resilience.

In the Tyne Valley alone the project has seen five new Community Flood Groups set up and flood plans created, adding to the 11 that were already established, and 28 new volunteer Flood Wardens recruited. Over 3,000 school children have also been involved in workshops looking at the causes of flooding, what to do in a flood and how the future generation can get involved in tackling the effects of climate change.

For more information and to find out how to Prepare. Act. Survive. visit the ‘what to do in a flood’ page.

Over 5 million homes are at risk of flooding in England alone, the average cost of flooding to a home is £30k and the mental health-impacts long-lasting.

A record government investment of £5.2bn to better protect 336,000 properties was announced this year, through the creation of around 2,000 new flood and coastal defences in England by 2027.