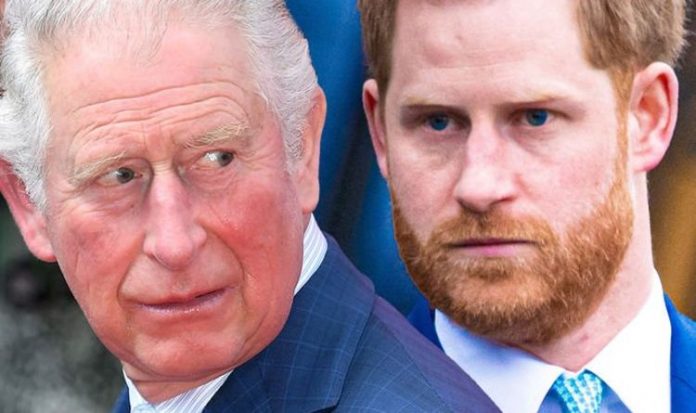 Rumours regarding Meghan Markle began to frustrate Prince Harry early into the pair’s relationship. In November 2016, Prince Harry issued a statement from his office demanding his girlfriend be left alone from the world’s press. However, this caused friction within the Royal Family, according to a royal expert, after Prince Charles’ tour was “torpedoed”.

The content was not the topic of concern but rather the timing of Prince Harry’s statement.

Channel 5’s royal documentary ‘Meghan and Harry: The New Revelations’, saw royal commentators reflect on the impact this statement had on the Royal Family.

Mr Myers said: “Prince Harry’s decision to write this statement himself and give the family only 20 minutes notice that he was putting it out was absolutely catastrophic.

“It torpedoed Prince Charles’ tour of the Middle East which went down like a lead balloon in the palace.”

The narrator explained how the Royal Family ensure certain members are not overshadowed by others.

The narrator said: “The Royal Family has strict protocols in place to ensure they don’t overshadow each other’s work.

“This is something Harry appeared to overlook when he attempted to protect Meghan.”

“It was certainly the most personal statement I have ever read from a senior member of the Royal Family.”

She added: “I think one of the themes that is explored in Finding Freedom is the jealousies of some members of the royal household for the level of attention the Sussexes were getting.

“There was a point when Charles and Camilla weren’t even getting a look in.

“All the tabloids wanted to run were stories about Meghan and Harry and that became a problem.”

Finding Freedom was written by royal commentators Carolyn Durand and Omid Scobie. Prince Harry and Meghan have said they did not contribute to the book.