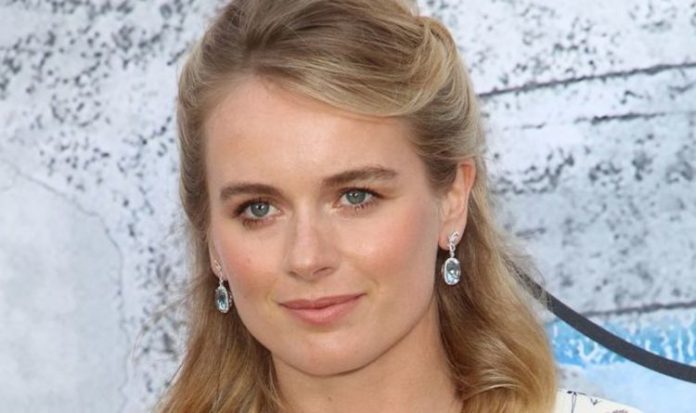 Cressida married property investor Harry Wentworth-Stanley during a small, private ceremony in West Sussex over the summer. Now, Prince Harry’s ex-girlfriend has opened up on her big day in an essay listing all the misadventures and funny moments that took place during her covid-secure nuptials.

Cressida recalled her long drive to the church alongside her father, entrepreneur Jeffrey Bonas.

Her beloved dad, the actress and model wrote, appeared to be “strangely quiet” and, when asked what was wrong with him, he provided Cressida with a vivid image to describe his unique feelings.

Cressida wrote in the Spectator: “We drove up and down a dual carriageway several times before eventually arriving at the church 40 minutes late.

“My dad seemed strangely quiet and I asked him if he was all right.

“But he didn’t want to let his daughter go.”

Cressida tied the knot in July in front of a restricted and socially-distanced crowd.

Recalling the bittersweetness of being able to get married but having to do so without all her loved ones around, Cressida wrote: “As Harry and I both have abnormally large families (22 siblings and four sets of parents between us), it was impossible for them all to be there.

“But the whole time I just wished that they were.

“This was the only sad part of an otherwise happy day.

“I am certain we value our family and friends even more when they are absent.”

The White House Farm actress also opened up on her wedding dress – which was neither new nor worth thousands of pound like many other gowns.

She said: “Four days before the big day I marched up and down Oxford Street on the hunt for a wedding dress.

“Finding nothing, I remembered an old Whistles dress I once wore for a James Arthur music video.

“I went home and found the dusty frock at the back of my cupboard.

“After some ironing, it looked good as new.”

The now-Duke of Sussex reportedly wrote regularly to his then-girlfriend while serving in Afghanistan.

The couple were seen attending several royal functions together, and remained friends after splitting.

On May 19, 2018, Cressida attended Harry and Meghan Markle’s wedding at St George’s Chapel in Windsor.