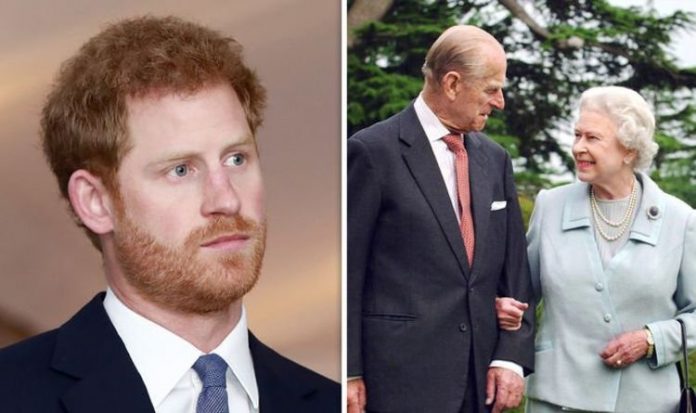 The Duke of Edinburgh, 99, has been in hospital since Tuesday night, after “feeling unwell” for several days beforehand. He was admitted as a precaution, but concerns for his health heightened yesterday when Prince Charles visited his father at King Edward VII Hospital, which is only allowed in “exceptional circumstances”, according to the hospital’s guidelines. A Palace source said the Duke remains “in good spirits” and is expected to stay in hospital until next week.

Harry is reportedly self-isolating in his Montecito mansion in case he needs to travel to the UK at short notice.

The Duke of Sussex is known to be close to Philip, with whom he shares a passion for the military and protecting the environment.

Philip has been a rock to the Queen during their 73-year marriage and Harry had a particular insight into his grandparents’ relationship when he gave a rare interview to mark her Diamond Jubilee.

Harry said his grandmother would not have been able to make such a success of her reign, had she not had Philip by her side the whole way.

He said in 2012: “Regardless of whether my grandfather seems to be doing his own thing, sort of wandering off like a fish down the river, the fact that he’s there ‒ personally, I don’t think she could do it without him.”

Prince Harry had a fascinating insight into the Queen and Philip’s relationship (Image: GETTY)

The Queen and Prince Philip on their honeymoon in 1947 (Image: GETTY)

The Queen and Philip first met when he was in the Navy during World War 2, and the pair exchanged letters during that time.

In 1946, the two wanted to get married, but King George VI told them to wait until then-Princess Elizabeth was 21.

They tied the knot in 1947 and lived for several years in Malta, where they started their family.

Then, their lives were turned upside down by the unexpected death of the King, which put the Queen on the throne aged just 26.

They had two young children at the time ‒ Prince Charles, three, and Princess Anne, one ‒ and had two more children over the coming years.

The Queen and Prince Philip with Charles and Anne in 1951 (Image: GETTY)

In an ever-changing modern world, the one constant has always been her consort, the Duke of Edinburgh.

He said the fact that he is “the only man in the world who treats the Queen simply as another human being” is something she truly values.

While the pair are very different, they compliment each other, according to the Duke himself, who insisted that it has strengthened, not weakened their marriage.

Speaking at the Royal Windsor Horse Show in 2006, he said: “It’s the secret of a happy marriage to have different interests.”

Royal biographer Philip Eade said in his book ‘Young Prince Philip: His Turbulent Early Life’ that the marriage had a transformative impact on the Queen.

One diplomat claimed: “She had a protective shell around her and he brought her out of it.

“He helped to make her what she’s become.”

Perhaps key to this was the fact that it was a true love match, relatively unusual for royalty in the Forties.

Philip was an unusual choice for a groom, given that he was an exiled Greek prince, after the Royal Family in Greece were ousted in an anti-Monarchist movement.

However, the Queen Mother sought assurances from Philip that he would “cherish” her daughter, to which he gave a heartfelt response.

“I wonder if that word is enough to express what is in me.”

The Queen and Prince Philip holding hands in 2015 (Image: GETTY)

He added that he had “fallen in love completely and unreservedly”, adding: “The only thing in this world which is absolutely real to me is my ambition is to weld the two of us into a new combined existence that will not only be able to withstand the shocks directed at us, but will also have a positive existence for the good.”

This dedication must have been what got the couple through the bumps in the road, of which there were many.

The couple disagreed over issues like the passing on of their surnames ‒ Philip was initially told he would not be able to pass on the name Mountbatten ‒ where their children would go to school and there were even accusations of extramarital affairs.

These issues were recently dramatised in the first and second series of Netflix’s The Crown.

However, despite these issues and the incredible pressure of being perhaps the most famous couple in the world, they have come through stronger than ever after 73 years of marriage.