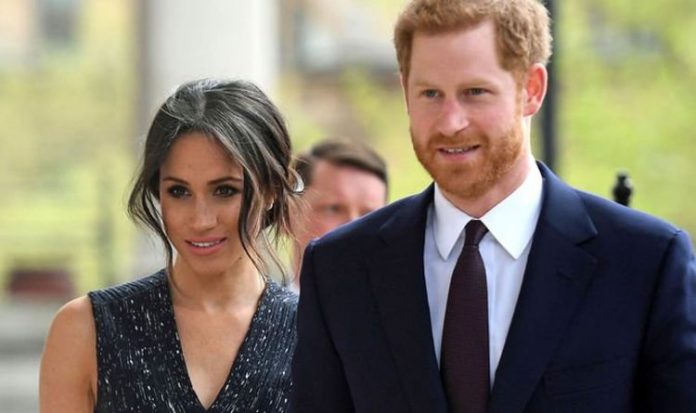 Meghan and Prince Harry’s launch of their much-anticipated organisation appears to be close after the couple unveiled Archewell’s website. This foundation, set to become their charitable platform, is going to be particularly important for the Duke of Sussex, royal expert Nigel Cawthorne said.

The author of Prince Andrew, Epstein, Maxwell and the Palace told Express.co.uk: “For Prince Harry, Archewell will be a way to escape the curse of being the royal spare that has plagued his uncle Andrew after he left the Navy.

“Archewell will allow Harry to focus on what sets him apart through his achievements, the things he feels passionate about, rather than the royal pedigree he shares with his family.”

But Archewell will also be an important test for both Meghan and Harry and their desire to set themselves on a different path than the rest of the Royal Family.

Mr Cawthorne added: “It will be important for the couple to show that they can create success on their own terms rather than through becoming a Californian outpost of the Royal Family in exile like Harry’s relative the Duke of Windsor.”

Meghan and Prince Harry bowed out of royal life on March 31, the day before they officially relinquished carrying out royal duties and using their HRH styles.

Prince Harry and Meghan Markle are working behind the scenes on Archewell (Image: GETTY)

Upon leaving the Royal Family as full-time working members, the couple also left behind their first brand, Sussex Royal.

As they signed off their now-defunct Instagram account, the pair announced they would spend a few months working behind the scenes on their new organisation, set to replace the never launched Sussex Royal Foundation.

In April, Meghan and Harry first mentioned the name of this new organisation, Archewell.

After trademark applications filed under this organisation’s name were found, the Sussexes said they felt compelled to explain what they were working on.

Speaking about the name and mission of their new enterprise, Meghan and Harry said: “Before SussexRoyal, came the idea of ‘Arche’ – the Greek word meaning ‘source of action’.

READ MORE: Prince Harry ‘furious’ he and Meghan Markle were ‘shunted aside’

Over the past few months, the focus of Archewell has become more clear.

In late September, the Duchess of Sussex revealed one of the key goals of the foundation is to help guide positive communities.

Taking part in the Fortune’s Most Powerful Women summit, Meghan said: “Part of our focus with the Archewell Foundation is to just ensure that we are helping foster healthy positive communities—online and off—for our collective wellbeing.

“And when you know something is wrong, reporting it, talking about it, ensuring that the facts are getting out there.

Fostering digital communities appear to be seen as the foundation work for the Sussexes.

Hosting a Time 100 Talks focused on the digital landscape in mid-October, the couple also explained how they have realised that, without a healthy digital world, their humanitarian work on other causes would not progress.

Archewell is widely expected to also be focused on issues Meghan and Harry have been working on for years.

Prince Harry could ‘escape the curse of the spare’ thanks to Archewell (Image: GETTY)

The Duchess, before joining the Royal Family, distinguished herself for taking a stance on female empowerment and equal access to education.

Prince Harry has worked on ending the stigma surrounding mental health as well as empowering veterans through the Invictus Games.

He has also focused his attention on climate change and helping vulnerable children through his charity Sentebale.