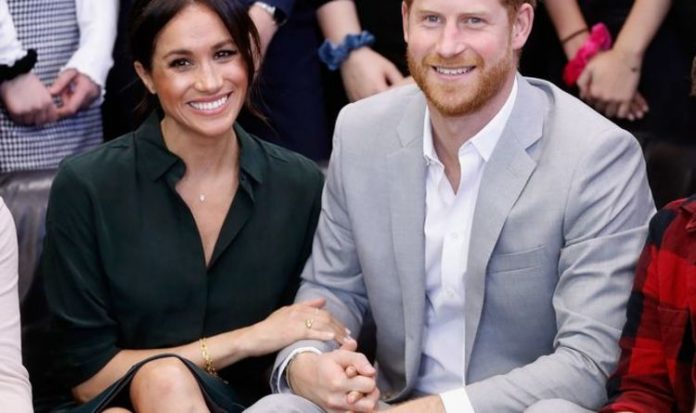 Prince Harry and Meghan Markle’s unofficial biography, Finding Freedom, is expected to dive into the details of the royal couple’s relationship. Royally Obsessed podcast hosts Roberta Fiorito and Rachel Bowie discussed some of the details from the extract and praised Harry for his unique dating technique. The pair reflected on Harry’s decision to send Meghan a ghost emoji after their first date.

The royal commentators agreed that Harry sent this message as a unique way of saying “hey boo”.

Ms Bowie said: “This is one of my favourites, the thing about the ghost emoji.

“I guess Harry was texting all the time with Meghan.

“Even after Meghan got back to her hotel room after their first date Harry sent her a text.

Ms Fioriot noted that this revelation caused confusion amongst many about the meaning of this.

“For transparency, I have never used the ghost emoji in this way.

Royally Obsessed podcast hosts Roberta Fiorito and Rachel Bowie discussed some of the details from the extract and praised Harry for his unique dating technique.

Ms Bowie and Ms Fiorito also discussed the claim in Finding Freedom that said Meghan was told off by a senior royal official for wearing a piece of Jewellery.

“The necklace was a gold chain with two small letters on it, M for Meghan and H for Harry.

Ms Bowie argued she believed this warning to be over the top and admitted to being surprised at how seriously the Royal Family took the incident.