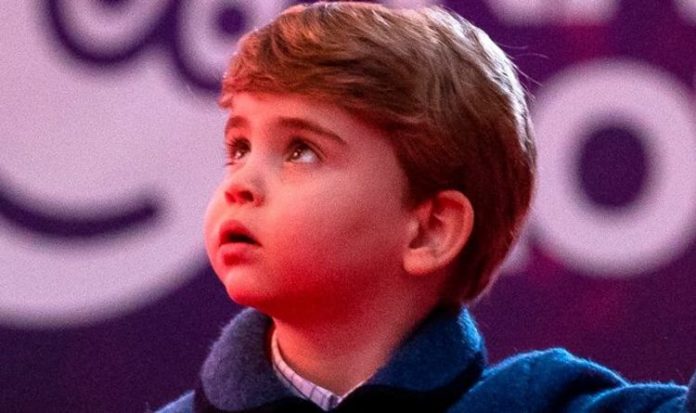 Prince Louis appeared to be having the time of his life as he grinned cheekily at the camera with siblings George and Charlotte in the Cambridges’ Christmas card for 2020. The two royal brothers are seen sporting a matching casual style, both wearing a shirt with a smart jumper and long, green trousers. The photo was especially significant as it appeared to confirm Kate, the Duchess of Cambridge will not be following the same clothing rules she used when Prince George was a toddler.

The Royal Family has long fallen in line with the aristocratic rule dictating male children should only be made to wear shorts until they are about eight years old.

Prince George only made the switch from shorts to long trousers when he acted as a page boy to his uncle Prince Harry’s wedding to Meghan Markle in 2018.

But George’s younger brother beat him by nearly two full years as he has already been allowed to ignore the rule and sport trousers on at least another occasion.

In a video the Duke and Duchess of Cambridge released earlier in the year, Prince Louis could be seen standing in the garden of that family’s country pile, Anmer Hall, clapping for NHS cares with Prince George and Princess Charlotte.

JUST IN: Harry ‘desperately’ trying too hard in podcast trailer with Meghan

In that occasion, the royal toddler was also not wearing shorts but matching both his siblings with blue corduroys.

Mr Hanson said: “Trousers are for older boys and men, whereas shorts on young boys is one of those silent class markers that we have in England.

“Although times are slowly changing, a pair of trousers on a young boy is considered quite middle class — quite suburban.

READ MORE: Princess Eugenie on verge of tears as she pays tribute to Sarah Ferguson – ‘Going to cry!’

“She would have wanted to be a country mum and be in town occasionally.

“I don’t think she would have been living a very different life.”

The Cambridges spent several months at Anmer Hall as Prince George and Princess Charlotte’s school shut down because of the pandemic.

Kate also revealed she and William struggled to have Prince Louis follow social distancing rules because of his fascination with people.

“So he goes out wanting to cuddle everything, particularly any babies younger than him.”