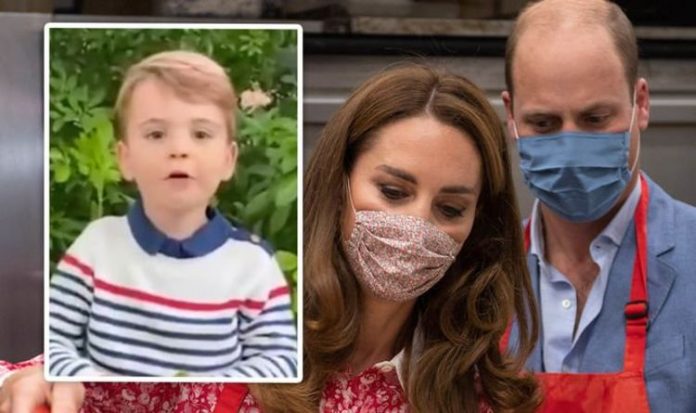 The youngest son of Kate, Duchess of Cambridge, and Prince William has a soft spot for cooking queen Mary Berry, as his mother revealed in December last year. And he recently has got the chance to impress the BBC star, as he was asked by his parents to help out in the Cambridges’ kitchen to prepare a delicious-looking plate of cupcakes to support the Poppy Appeal.

As revealed by the Royal British Legion, Kate and Prince William delivered to the organisation beautiful cupcakes decorated with little red poppies on top they had prepared with the help of their three children.

Another royal fan also joked about the little Cambridge, recalling the pictures Kate took to mark his second birthday in April.

In these snaps, Louis had his face and arms covered in paint after having completed a touching tribute for the NHS.

Replying to Twitter user Livvie, who wrote “Kate definitely did the piping lol”, Victoire joked: “After the painting pic with Louis I think you may be right.”

During a BBC special aired last year, Kate revealed to Mary herself her name was one of the first words her youngest son said when he started to speak.

The little Cambridge was also said to be able to recognise Mary’s face after having seen her on the spines of a few cookbooks at Kensington Palace.

An insider who spoke to earlier this year added: “Prince Louis likes nothing better than to check on Mary Berry cookbooks.

“He loves the pictures, points out all the things he wants to eat, with The Very Chocolate Cake, Plum Crumble seeming to be hot favourites, and fruit scones being a must.

“Whenever he sees Mary on the television, he whoops and claps his hands.”

The Royal British Legion revealed in a tweet yesterday the Cambridges had come together in the kitchen to bake the treats as part of their efforts to support the Poppy Appeal during the coronavirus pandemic when there are fewer occasions to wear a poppy in public.

The tweet read: “The Duke and Duchess of Cambridge and their family have shown their support for our #PoppyAppeal this year by baking these delicious poppy cakes which were delivered to our care home in Norfolk.

“There are many ways you can support this year, from baking your own cakes to doing a poppy run.”

Royal fans were not only delighted to see these cakes but also in awe with the Cambridges’ efforts to involve their young children in such an important activity.

Baking these little cakes, decorated with small red poppies on top, will help Prince George, Princess Charlotte and Prince Louis understand the importance of support others and back charitable initiatives, according to royal fans.

Vanessa wrote on Twitter: “These are beautiful and I’m sure that it was also a learning experience for George, Charlotte and Louis.

“What a thoughtful way to support the #PoppyAppeal.

“This year it’s so important to remember those that fought for our freedom.”

Twitter user LouMc added: “The Duke and Duchess of Cambridge continue to teach their children the important lessons in life and the benefits of hard

work and supporting one another. Bravo!”

Moi also said: “Just when I thought that the Duke and Duchess of Cambridge (and kids) are doing an amazing job in supporting the British people, they come up with more surprises!

“This is NOT a little thing. This is THE sweetest and most thoughtful thing!”