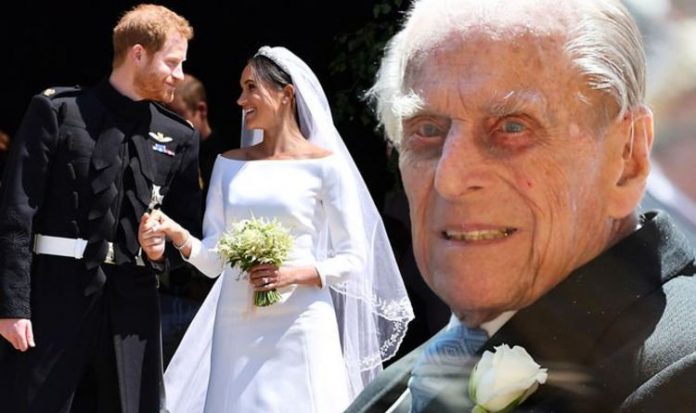 Prince Philip was admitted to London’s King Edward VII Hospital as a precautionary measure on Tuesday evening after he felt unwell. ITV’s Royal Editor Chris Ship told LBC that the Duke of Edinburgh battled back from a hip operation to be able to attend his grandson’s wedding without a walking-stick or frame for support.

Mr Ship said: “We were all wondering a few weeks before Harry and Meghan’s wedding if he would be able to go and see his grandson get married or not.

“Well, this is the Duke of Edinburgh, he had the hip operation, did his exercises or therapy and then walked in with no stick or frame.

“That is the kind of person that he is, he would not want to be seen to have any weaknesses physically.

“But everybody has weaknesses, he has had hospital treatment.”

“He was last in King Edward VII Hospital in December 2019 just before Christmas when he had a five-day stay there.”

Prince Philip is reportedly in “good spirits” and Buckingham Palace is “not concerned” by the Duke’s condition following his admission into hospital.

BBC royal correspondent Nick Witchell said: “We know that he had been feeling unwell for a couple of days.

“We are told that this is not Covid related, it is according to Buckingham Palace are precautionary admission.

“He was taken from Windsor to the Hospital in London by car.

“We are told that he walked in and it was not an emergency admission.

“It is the decision of his doctors that he should be admitted to hospital as a precaution.

“We know of course that he is just a couple of months short of his 100th birthday.”

The BBC’s royal correspondent added: “He has been at Windsor with the Queen in self-isolation with a small number of officials.

“He was last in hospital just before Christmas in 2019.

“On that occasion, he was admitted for observation and treatment.

“That too was described as precautionary admission and he spent four nights in hospital on that occasion.

“Certainly I sense from Buckingham Palace there is no sense of alarm over this.”