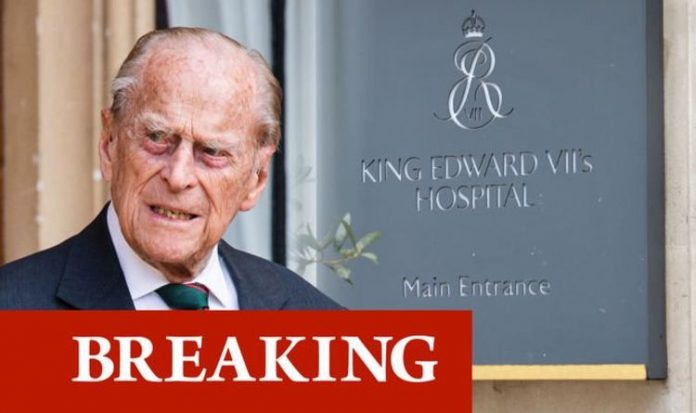 Queen Elizabeth II’s husband Prince Philip, 99, is due to remain in hospital for a further few days after he was admitted “as a precaution” on Tuesday night. According to sources, the Duke of Edinburgh is expected to stay in hospital for observation and rest over the weekend and into next week.

The Duke of Edinburgh travelled to London’s King Edward VII hospital from Windsor Castle on the order of a palace doctor.

The palace has been keen to play down fears for the elderly royal’s health and has confirmed the illness is not COVID-19-related.

A place statement released on Tuesday read: “His Royal Highness the Duke of Edinburgh was admitted to King Edward VII’s Hospital in London on Tuesday evening.

The Duke is due to spend the weekend in hospital following what has been a busy week for the Queen.

On Friday it was announced Meghan Markle and Prince Harry would not be able to keep their royal patronages going forward and that the honorary roles would be returned to the Queen.

How is Prince Philip doing?

According to insiders, the Duke remains in good spirits despite being in hospital.

On Friday, Daily Express royal correspondent Richard Palmer tweeted:  “Prince Philip is likely to remain in hospital into next week but is still in good spirits, a source says.”