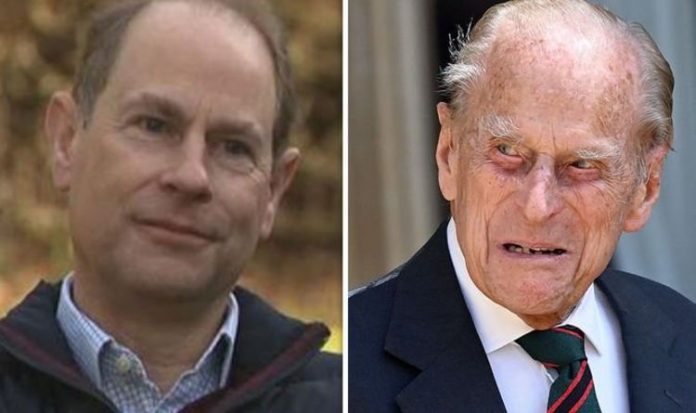 Prince Philip, 99, retired from public life in 2017 after decades of extraordinary service to the Crown. One of his greatest achievements as a working royal was establishing the Duke of Edinburgh Award Scheme which encourages young people across the UK and Commonwealth to take part in outdoor activities and to give back to their local communities.

Prince Philip was given his Duke of Edinburgh title ahead of his marriage to the Queen (then Princess Elizabeth) in 1947.

The title is a lifelong peerage and will only pass on following the Duke’s death, with his youngest son Prince Edward, 56, expected to inherit the title.

Constitutional expert Iain MacMarthanne explained: “In respect of the dukedom of Edinburgh, it was felt, to ensure its survival, that it should pass to another of his sons, this being Prince Edward.”

Unlike his brothers, Prince Charles, 72, and Prince Andrew, 61, who both received dukedoms from the Queen on their wedding days, Edward currently holds an earldom – a lower-ranking peerage.

Edward is understood to have been offered the dukedom of Cambridge by the Queen upon his marriage to Sophie, Countess of Wessex but is said to have asked to be made the Earl of Wessex instead because of his admiration for the Wessex character in the blockbuster film Shakespeare in Love.

As well as being lined-up as the next Duke of Edinburgh, Prince Edward has also taken on his father’s legacy when it comes to continuing his work with the DofE award scheme.

In a recent interview with Sky News about the scheme, Edward emphasised the importance of outdoors education, especially during the pandemic.

The Earl said: “We know that if you give young people those challenges, that they do respond positively and they will come up with the ideas.”

He added: “So we keep our fingers crossed.”

Asked whether the Duke was “frustrated” to be in hospital, Edward answered: “Just a bit!

“I think that gets to all of us, and then, you can only watch the clock so many times and the walls are only so interesting.”

He added: “We’ve had some brilliant and lovely messages from all sorts of people and we really appreciate that and so does he, I’ve been passing them on. It’s fantastic, thank you.”

Buckingham Palace released an update on Prince Philip’s health earlier in the week confirming the Duke was “responding to treatment” and that he would remain in hospital “for several more days.”

Why is Prince Philip not Prince Consort?

While Prince Philip is the Queen’s Consort, he does not hold the title of Prince Consort as previously held by Queen Victoria’s husband Prince Albert.

Asked why this isn’t the case, Mr MacMarthanne explained: “Although an HRH and a royal Duke at the time of the queen coming to the throne, titles given to Philip by George VI in anticipation of his marriage, Philip was not a prince.

“Previously a Prince of Greece and Denmark, he ceased to use these styles after becoming a naturalised British citizen months before his marriage.

“Only in 1957 did the queen create her husband a Prince of the United Kingdom.

“As to why Philip has never been created Prince Consort is open to speculation, most likely it is a case of choice and taste.

“All that is certain is that it is not a formal title, nor is it automatically assumed by the consort of a queen regnant.”