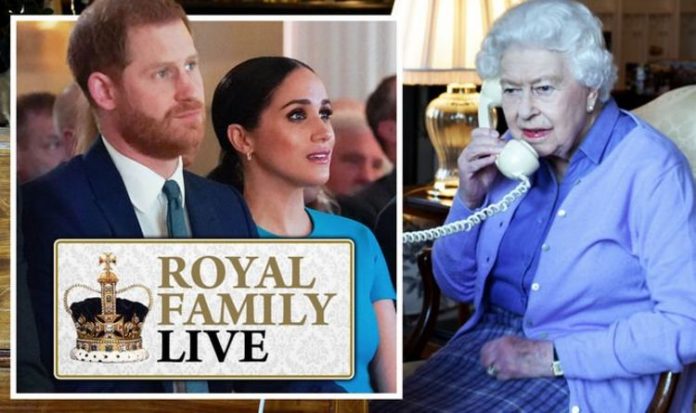 Meghan and Prince Harry will be “very candid” during their sit-down chat with Oprah, their first interview since announcing their intention to step back as full-time working royals in January 2020. And, this source close to the couple claimed, the Duke and Duchess of Sussex could lift the lid on the “tensions” with the Royal Family.

It will come just weeks after the pair were unceremoniously stripped of their titles and patronages – a decision by the Queen that left the couple reeling.

The source told E! News: “There is a lot of tension between them and the Royal Family.

“The interview is going to shine a light on what they have been through.

“Meghan and Harry are relieved they are away from it all.”

Meghan and Harry are believed to have already recorded the 90-minute special, which will air on March 8 at 1am GMT (March 7 at 8pm ET) on US broadcaster CBS.

This interview will touch upon a wide range of topics and will see Meghan taking the centre stage to chat alone with Oprah about motherhood, her arrival into the Royal Family and how she is coping with public scrutiny – among other issues.

Prince Harry is set to join the pair later to speak about their hopes and plans for the future.

This comes after the Queen announced her decision to ask the Duke and Duchess of Sussex to relinquish all their royal and military patronages after they confirmed they have no intention to return into the royal fold as working members of the Firm.

Buckingham Palace said in a statement last week: “The Duke and Duchess of Sussex have confirmed to Her Majesty The Queen that they will not be returning as working members of The Royal Family.

Meghan and Harry appeared to show their unhappiness with this move in the statement they issued a few minutes after the Queen’s announcement, in which they said everybody can live a life of service and that “service is universal.”

A different source told People magazine both Meghan and Harry were “disappointed” they lost these roles – including the patronage of the National Theatre and the Duke’s three honorary military titles.

However, the insider added: “They respect the decision that was reached.”

SEE BELOW FOR LIVE UPDATES ON THE ROYAL FAMILY

Zara Tindall has a “trusting” relationship with the Queen, a body language expert has claimed.

While she will not carry out official royal duties, Zara has been seen with the monarch at various events in the past, and before coronavirus restrictions were in place.

When they appeared together, body language expert Judi James commented on their relationship.

Speaking specifically on one outing, she claimed Zara “increased the proximity” to show “trust

The expert continued: “Zara points something out to the Queen, who mirrors her gesture to show like-minded empathy.

“Zara even leans towards her grandmother to increase the proximity.

“This places their heads close together to signal trust.”