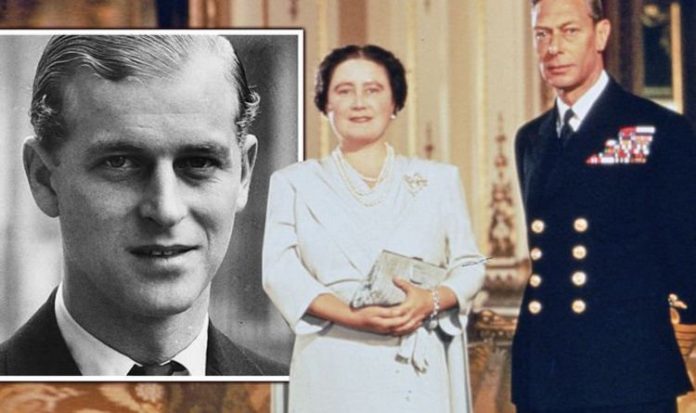 Prince Philip is still being checked over at King Edward VII Hospital in London. Buckingham Palace announced yesterday that the Duke of Edinburgh was taken “as a precaution”. It came as the royal had felt “unwell” for a few days.

A source told the BBC said it was not coronavirus related.

They said the 99-year-old was in “good spirits”.

He is expected to remain in hospital for a few days of observation and rest.

Philip has been an integral part of the Royal Family and has supported the Queen throughout her 69-year reign.

Prince Philip: The Duke’s romance with the Queen was kept a secret from the British public (Image: GETTY)

Philip health: The Prince was admitted to hospital on Tuesday after feeling unwell for a few days (Image: GETTY)

He was a cadet then, tasked with entertaining Elizabeth and her sister Margaret.

They would not partner up for years, with Philip pursuing other relationships.

Royal historian Christopher Warwick previously told Vanity Fair that in the interlude years, as Elizabeth grew up and Philip was away in World War 2 with the Royal Navy, “members of the family who were kind of hoping, if not encouraging, a kind of love match between these two”.

Yet things were not easy.

JUST IN: Harry ‘self-isolating’ as he readies for UK return amid Philip fears

Philip young: The Duke pictured as a youth in 1930s (Image: GETTY)

In order to marry Elizabeth, Philip had to make a string of sacrifices.

He was forced to become a naturalised citizen, with none of his German family members allowed to attend the wedding, according to The List.

This included Philip’s three sisters who “had married German men”.

On top of this, the King did not want to officially announce Elizabeth’s engagement until she was 21.

This meant that the pair were forced to keep their relationship a secret for a long time before it could be announced.

The Firm: The Queen Mother is said to have viewed Philip as ‘the enemy’ to have (Image: GETTY)

Royal romance: The pair have been married for more than 70 years (Image: GETTY)

In the beginning, The List said “George VI didn’t approve of his daughter’s choice of groom.”

The King was concerned about British opinion when it came to the idea of his daughter marrying a Greek prince.

George VI was also said to have hated many of Philip’s personality traits: “His voluminous laugh and wild manner also reportedly got under the King’s skin.”

Philip also faced the task of winning over Elizabeth’s mother, the Queen Mother.

According to the documentary, ‘The Private Lives of the Windsors’, she perceived Philip as “the enemy”.

Duke of Edinburgh: Philip has been an integral part of the Firm since marrying Elizabeth (Image: Express Newspapers)

This was as she disliked having to contend with him for Elizabeth’s attention.

The Queen Mother was used to getting her own way, it claimed, and so was resentful of being forced to let an outsider into her close circle, as he “challenged her authority as family matriarch”.

Despite this, the pair married on 20 November, 1947, Philip aged 26, Elizabeth, 21, last year having celebrated their 73rd wedding anniversary.

Both busy, working royals for much of their lives, Philip and the Queen have often spent time apart, and have never shared a bedroom.

Yet, during the coronavirus pandemic, they have been together for some of the longest stretches of their lives, forced to isolate in their bubble.

Richard Fitzwilliams, a royal commentator talking about last year’s wedding anniversary, told Express.co.uk: “The relationship between the Queen and Prince Philip is one of the great royal romances.

“They can look back on a year of turmoil as the world has been hit by the COVID-19 pandemic but also one in which they have been able to spend a good deal of time together which has been a great bonus.