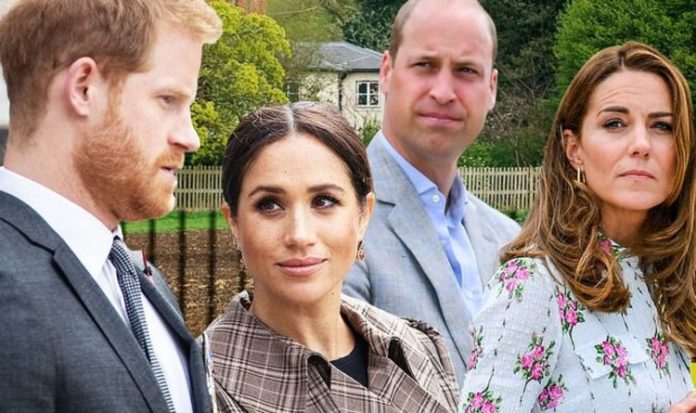 Harry and Meghan have said they “are delighted” to be able to “open up” Frogmore Cottage to Princess Eugenie and her husband Jack Brooksbank. On the Windsor Estate, the Berkshire house was the Duke and Duchess of Sussex’s main home before they stepped down as working members of the Royal Family in March. Eugenie moving in has been seen by some royal watchers as a sign that Harry and Meghan may be planning to spend even less time in the UK than was previously thought.

But their office insists it is still Harry and Meghan’s main UK residence ‒ despite them making no visit since moving to California earlier this year.

Frogmore was the scene of a reconciliatory meeting between the Sussex household and the Cambridge household, too.

Prince William and Kate, Duchess of Cambridge visited the property in Easter 2019 where they “chatted over a cup of tea”.

The visit was “brief, just 35 minutes, but it was the beginning of the couples’ coming together and putting things behind them”, according to Finding Freedom ‒ a sympathetic biography of Harry and Meghan written by Omid Scobie and Carolyn Durand.

Frogmore Cottage is on the Windsor Estate (Image: GETTY)

The authors ‒ famously close with the Duke and Duchess of Sussex ‒ claim this came after months of tension between the two families, particularly William and Harry.

The rift is said to have started when Harry took offence at William urging him to slow down his relationship with the former US actress, referring to her as “this girl” before Harry had proposed to the future Duchess.

Harry was unhappy at the “tone of snobbishness” that was “anathema to his approach to the world” and this bitterness between the two brothers persisted for months after Harry wed Meghan in May 2018.

But by April 2019 their relationship was beginning to thaw again, particularly after William openly supported his brother’s household in public.

READ MORE: Eugenie’s baby to enjoy gardens Meghan was ‘excited about for Archie’

Mr Scobie and Ms Durrand write: “[Harry] decided to put the past behind him and appreciate the efforts his brother had made.

“They were a family, and that was not a bond worth breaking.”

As the brothers made amends, William reportedly said: “You know what? Me and my brother, for the first time in two months, have had a really lovely conversation together.”

A Buckingham Palace aide added: “To see them warm with each other was delightful.”

Tension between Harry, Meghan, Kate and William was clear in March (Image: GETTY)

It was in the spirit of this good-will that Kate and William visited Frogmore.

Mr Scobie and Ms Durrand conclude: “Before William and Kate left, Harry excitedly showed them around the house, as it was their first time visiting Frogmore Cottage since the renovation.”

Just months later, this apparent lull in the ill-feeling between the Sussexes and the Cambridges came to an end.

When Meghan and Harry toured southern Africa in September 2019, the Duchess opened up about the mental health struggles she had been going through as a member of the Firm.

And Harry admitted in an interview with ITV’s Tom Bradby that he and William were on “different paths”.

The Duke and Duchess of Sussex then spent the Christmas period in Canada and announced their decision to step back from royal duties in January 2020.

At the subsequent Sandringham Summit, where much of their post-royal fate was decided, William is said to have been so angry with his brother that he refused to sit down for lunch with him.

While the Sussexes are not expected to return to the UK very often, they will still stay at Frogmore Cottage when they do.

Following reports they had “moved out”, their office insisted that they would “share the property” with Eugenie and Jack “when they travel to the UK”.

Frogmore Cottage was made into one home from five separate housing units after Harry and Meghan’s wedding.

It became a controversial topic after £2.4million of taxpayers’ money was spent on its refurbishment.

Following their departure from the UK, Harry and Meghan came to an agreement with Palace accountants and have now returned the money.

Finding Freedom is a sympathetic biography of Harry and Meghan (Image: GETTY)

Sources close to Harry and Meghan have confirmed that they will “retain financial responsibility” for the property.

It’s not known what contribution Eugenie and Jack will make towards rental payments.

The move comes after the couple announced they are expecting their first child together.

It will be the Queen’s ninth great-grandchild.