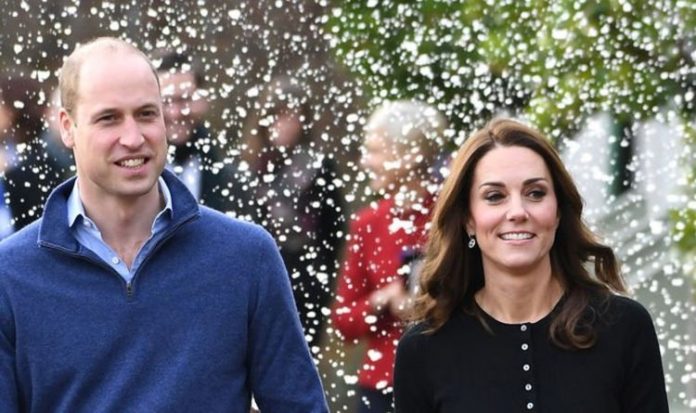 The Duke and Duchess could not be included in the Royal Family’s Christmas plans this year as the UK forces a three-household social bubble to prevent the spread of coronavirus. Prime Minister Boris Johnson set out his winter coronavirus restrictions earlier this month, which holds that three households may meet indoors over the week of Christmas to allow for celebrations. The Royal Household is reviewing their plans for the holidays with the Cambridge’s children said to be a health risk for the Queen and Prince Philip.

The Queen will be abiding by the coronavirus guidelines for the royal celebrations, whether they are held at Sandringham estate or Buckingham Palace.

But William and Kate may miss out on the festivities due to their children, Prince George, 7, Princess Charlotte, 5, and Prince Louis, 2.

Royal sources said to the Telegraph that Palace physicians are advising the Queen on whether to invite the Cambridge royals due to the children going to school amid the pandemic.

The physicians will then advise the monarch on the best course of action, as the Queen and Philip are both at high risk from the virus due to their age.

READ MORE: Queen news: Who is in the Queen’s Christmas bubble?

The royal sources added to the Telegraph that the family will decide it amends themselves.

They said: “They will sort it out between them; it will be about what’s practical.”

At the end of last year, Philip was hospitalised for a pre-existing condition, and has been self-isolating for much of the year.

The Queen and the Duke were reunited in Windsor Castle for the UK’s second lockdown on November 2.

Courtiers have also told the Daily Mail the Royal Family could still unite in full on Boxing Day due to the Governments rules on hunting.

The royals traditional Christmas shoot would abide by coronavirus guidelines as it counts as organised outdoor sports, meaning up to 30 royals could gather at Sandringham for the hunt.

A source said: “If they go to Sandringham, their traditional Boxing Day shoot could still take place, enabling them to see members of the family unable to join them on Christmas Eve and Christmas Day”.

But it remains unclear whether the royals will hold celebrations at Sandringham this year, which would mark the first time in 37 years they had not stayed at the estate for Christmas.

The Queen’s son Prince Edward and his family will likely be allowed in the monarchs Christmas bubble, according to a Daily Mail source.

The Queen and Edward’s wife Sophie are said to be particularly close, and the Earl of Wessex is the youngest of the monarch’s children.

A source close to the royals told last year: “(Sophie) is trusted and relied on by the Queen in a way I couldn’t say applied to the Duchess of Cambridge or the Duchess of Cornwall.

“She is like another daughter to Her Majesty, they are that close.”