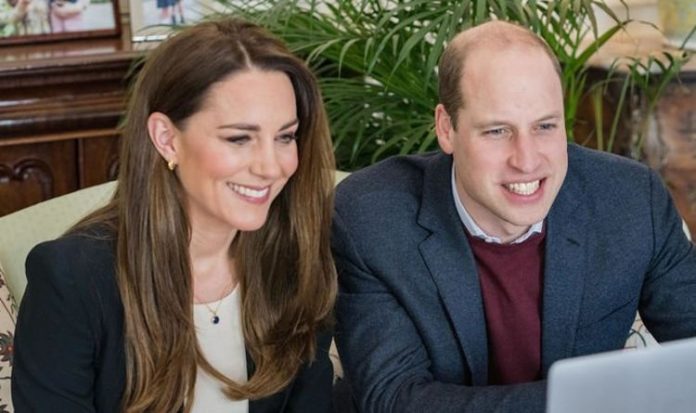 The Duke of Cambridge hit out at social media “misinformation” whilst speaking with two clinically vulnerable women who have been shielding since March 2020. Britain has vaccinated over 27 percent of its adult population, one of the highest proportions globally, raising hopes of a return to normal life.

On Monday Boris Johnson released a plan that could see all restrictions on socialising in England lifted by June 21.

William and Kate spoke with Shivali Modha, who has type-2 diabetes making her particularly vulnerable to coronavirus.

The mother-of-two admitted she had been nervous about the vaccine after reading social media posts, but had been reassured by Diabetes UK and family members who have had the jab.

The Prince said: “Catherine and I are not medical experts by any means but if it’s any consolation, we can wholeheartedly support having vaccinations. It’s really, really important.

“We’ve spoken to a lot of people about it and the uptake has been amazing so far.

“We’ve got to keep it going so the younger generations also feel that it’s really important for them to have it.

“So it’s great that Shivali you’re taking the time to work it out and come to the conclusion that ‘I need to do this’ because social media is awash sometimes with lots of rumours and misinformation, so we have to be a bit careful who we believe and where we get our information from.

“Especially for those who are clinically vulnerable as well, it’s so important that those vaccinations are done, so good luck.”

“I know there’s maybe the anxiety and worry leading up to it, but I hope for all of you it will add a bit of normality back to your lives and confidence as well as we go forward into the spring, that would be great.”

The Queen and Duke of Edinburgh, both of whom were vulnerable to coronavirus due to their age, have both been vaccinated.

Taking part in a video call with healthcare experts from the four British nations the Queen urged Britons to “think about other people rather than themselves” if they are having doubts about the vaccine.

Also on the call was Fiona Doyle from East Finchley who has been shielding since the pandemic began.

Asked by William how she feels about the vaccine the 37-year-old mother replied: “I can’t wait!

“I’m priority group six, so any day now I’m really hoping to get called up.

“I think I’m trying to not see it as a magic cure.

“I’m not going to go out licking lampposts or anything straight away!

“But it’s nice to know that mentally you have that layer of protection and that if you do end up being unfortunate enough to catch it, it won’t be as severe as it might have been without having been vaccinated.”