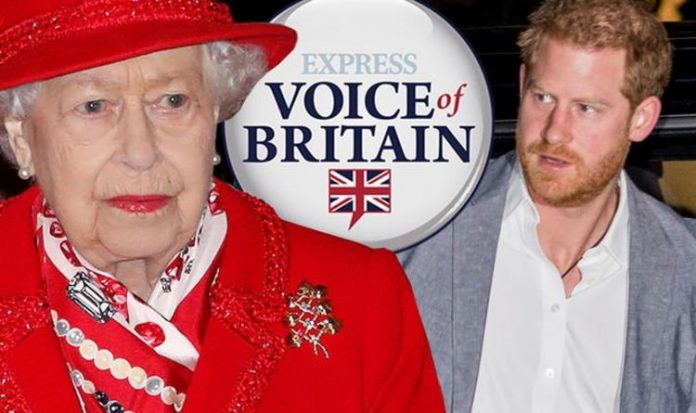 Harry has insisted his move to the USA was “never walking away” and was about “stepping back rather than stepping down”. But an exclusive Express.co.uk poll found there would be little public support for the Queen to leave the door open in case her grandson wanted to return to royal duties in the future.

A staggering 81 percent (19,979 people) said they did not believe the monarch should give Harry and Meghan an opportunity to return to the royal fold.

One reader said: “Not only shouldn’t the door be left open, it should be closed, taken down and the opening bricked over.

“He certainly did run away from royal life and the UK – he ran all the way to California, insulting his family and the people of his former country on the way.”

Another said: “Shut and lock the door on public life once and for all. It’s true, he didn’t walk away from royal life, he RAN.”

Another said: “Close every door. If the couple wishes to continue their charitable activities, they can continue as private citizens with absolutely no connections to the monarchy (of anything officially tied to the British government).

“I say this so that Britain can be protected from any ‘agendas’.”

Another said: “They have shown themselves unable to do the job. Leave them where they are.”

But some readers thought there might still be a way back for Harry and Meghan despite their decision to make their departure from royal life permanent.

One said: “We should keep the door open for him so long as they both keep their respect for our Queen and country and do not get involved in politics on both sides of the pond.”

The Duke of Sussex, who has quit royal duties for a new life in the US, opened up about Megxit to TV host James Cordon on The Late Late Show.

Harry continued: “So I did what any husband and what any father would do – I needed to get my family out of here.