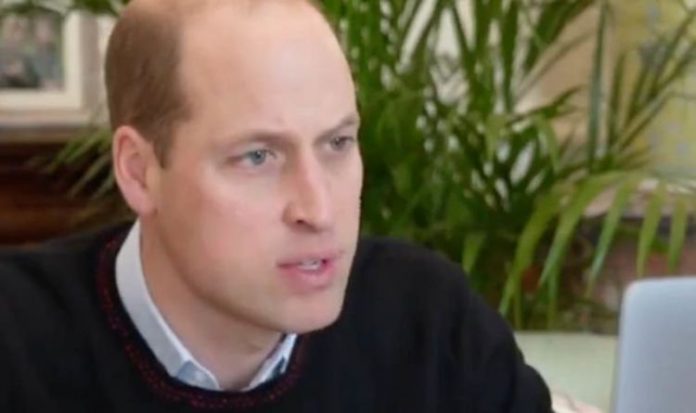 Prince William took part in a video chat with seven young people named in the 2020’s Young Champions of the Earth by the UN Environment Programme (UNEP). The Duke of Cambridge, who last year launched a decade-long project to change the tide of the climate crisis, listened to the young activists as they outlined projects they have been working on.

During the call, he praised the activists for their passion and awareness of the threat climate change poses.

And he urged young people to educate their families to change habits and lifestyles and have a positive impact on the planet.

He said: “If every young person educates their family on the environmental impact they are having, that in turn is making a difference and changing the tide and creating that momentum.

“I’m incredibly inspired and just so proud about everything you guys have done.

“If young people have a tiny bit of that passion that you have, then there’s a really good opportunity to do good in the environmental world.

“You are the shining lights of that movement and that interest.

“It allows people to see your path, your journey and go, ‘Do you know what? I want some of that, I can do that, I’ve got some ideas, too’.”

However, Prince William was warned by social media not to depict older generations as unaware of the climate crisis or careless about it.

One wrote on Twitter: “Be careful here. You could cross a line.

“I’ve been involved in environmental work since the ’70s.

“There’s plenty of us around, William. You ain’t the first generation to discover a need.

“Before you tell a younger generation to talk to an older one why don’t you talk to big business”.

A second social media user recalled the impact activists had on the planet five decades ago, when people started becoming more aware of finite resources and pollution.

They said: “Much as I adore Wills, he needs to remember that those ‘older relatives’ are yesterday’s hippies that started the whole Save The Earth campaign 50 years ago.”

Other social media users pointed out many young people have introduced in their lifestyles wasteful habits.

One said: “Interesting? So all the recycling, repairing, and reinventing of pretty much everything in everyday living – no throw out no plastics no takeaways – who actually needs re-education here? – the young need to go back three generations at least!!”

Another said: “If we lived life like our older relatives this world would be better.

“We’d shop local, support the local butcher, reuse pasta sauce jars even though they aren’t ‘cute’, store our leftovers in old margarine tubs, have a garden, mend our clothes and let our kids walk to school.”

And a third added: “The younger generation who can’t live without their phones, fast food, latest fashion etc etc etc”.

Prince William himself has been inspired and educated on the environment and its protection by his father Prince Charles and grandfather Prince Philip, as the Duke of Cambridge confessed upon launching the Earthshot Prize in October.

Explaining why world conservation is so important to him, William said: “I think with the family you get that generational hand on, and I think I’ve really picked up on the fact that my grandfather started caring a long time ago about the natural world, and my father’s spoken a lot and cares about the environment.”

Appearing on the documentary A Planet For Us All, the Duke said: “My grandfather was well ahead of his time.

“My father was ahead of his time. I really want to make sure that, in 20 years, George doesn’t turn around and say, are you ahead of your time? Because if he does, we’re too late.”

The Earthshot Prize will provide five one million pound-worth prize every year for the next decade to individuals, organisations, charities, experts and governments able to come up with workable solutions to the biggest environmental problems.