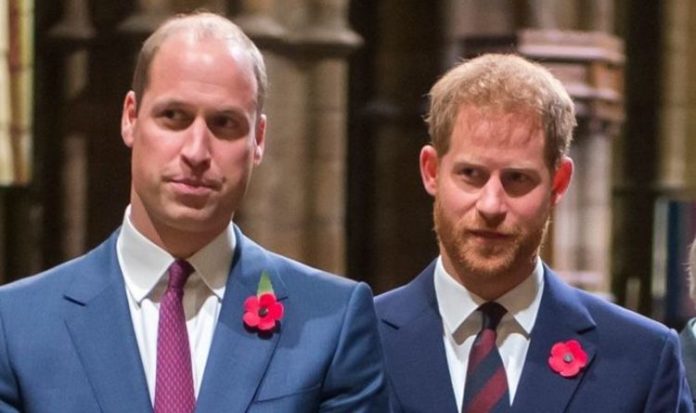 The Duke of Cambridge released a statement supporting his brother’s call for Meghan to be afforded more privacy. His carefully-chosen words were “the first indication that all was not rosy behind closed doors”, according to royal biographer Sean Smith.

The Duke of Sussex published an unprecedented statement on the Royal Family’s website in November 2016, hitting out at the “wave of abuse and harassment” he claimed Meghan had been subjected to.

Weeks later, Kensington Palace released a statement on behalf of William, in support of his brother’s no-nonsense stance.

William’s spokesperson said: “The Duke of Cambridge absolutely understands the situation concerning privacy and supports the need for Prince Harry to support those closest to him.”

It was released after reports suggested he had disagreed with his younger brother’s decision to go public about his disapproval for the intense press scrutiny Meghan was facing.

Harry acknowledged that it was “unusual to issue a statement like this”.

In making his move, he pushed aside the palace’s motto of “never explain, never complain” when dealing with the outside world.

He said: “It was the very opposite of a powerful endorsement.”

READ MORE: Where did Kate Middleton go to school?

“Instead, it was the first indication that all was not rosy behind closed doors.”

William, 38, and Harry, 36, were last pictured together at the Sussexes’ final royal engagement in March.

The two brothers walked down the aisle of Westminster Abbey together following the annual Commonwealth Service.

Harry looked glum while Meghan, 39, appeared to be in good spirits as the couple prepared to embark on their new life of freedom away from the royals.

In their bombshell biography Finding Freedom, authors Omid Scobie and Carolyn Durand told of how the Duchess of Cambridge “barely acknowledged” Meghan.

The Sussexes had not seen the Cambridges since January.

Nine months after their final engagement, Harry and Meghan are preparing to celebrate their first Christmas since leaving the Firm.

The couple are expected to mark the occasion with their son Archie at their new £11 million mansion in Montecito, Santa Barbara, in California.