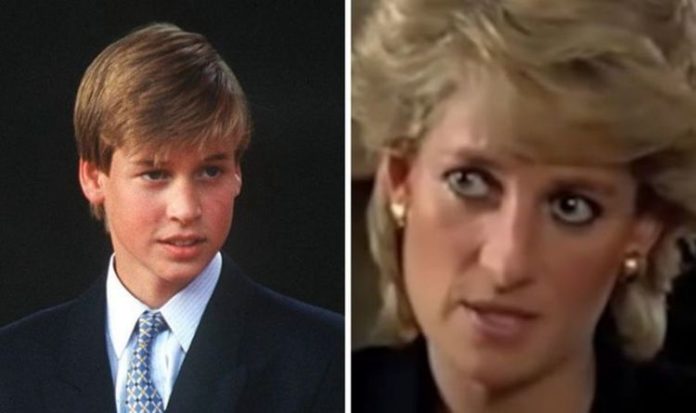 The Duke of Cambridge broke his silence over allegations surrounding the interview, by demanding the investigation “establish the truth behind the actions” of those involved. A row erupted after Princess Diana’s brother questioned Martin Bashir, who hosted the broadcast, and the BBC over how the interview was secured. It led the broadcaster to start an independent investigation into the 1995 interview, which shocked the world and was watched by around 23 million people in the UK.

The aftermath was seismic, and reports show that as a result the Queen told Prince Charles to divorce the Princess of Wales, which he duly did in 1996 – a year before Diana perished in a Parisian car crash.

But according to royal expert Katie Nicholl, Prince William was furious with his mother, and the decision to go public about her personal life, and her relationship with his father Charles.

The interview saw Diana infamously say there were “three people” in her marriage to the Prince of Wales, a nod to the affair Charles had been having with Camilla Parker Bowles.

Ms Nicholl claimed that “William was exposed to everything from the interview”, adding that the young royal then “called his mother in a fury and a rage” as he couldn’t understand why she’d done it.

Prince William’s heartbreak at Diana over Panorama interview: ‘Why did you do it?’ (Image: GETTY)

The expert then discussed a chat she had with Diana’s close friend Simone Simmons, on Amazon Prime documentary William and Harry: Brothers in Arms.

Ms Simmons explained that William was so infuriated that he told Diana “he would never forgive her for what she had done”.

Interest in the interview resurfaced earlier this month following a Channel 4 investigation to mark the 25th anniversary of its original broadcast.

William said: “The independent investigation is a step in the right direction.

“It should help establish the truth behind the actions that led to the Panorama interview and subsequent decisions taken by those in the BBC at the time.”

His comments came after it was confirmed John Dyson, a former Supreme Court judge, would be in charge of the inquiry, stating he would launch it “straight away”.

The 77-year-old vowed to ensure Mr Bashir, who has yet to comment publicly on the allegations against him, faced a “thorough and fair” investigation.

The claims against Mr Bashir involve his use of two fake bank statements in securing the interview with Diana.

Insiders close to the Duke of Cambridge claim that William’s intervention is “about protecting his mother’s legacy”, and described it as a “personal matter” for the future King.

The source added: “He has kept a close eye on what’s unfolded but believes things are moving in the right direction.

“The BBC has kept him informed appropriately. In the end, what he wants is the same as everyone else – for the truth to be unearthed and any appropriate action taken.”

It isn’t the first time William has spoken about the documentary, as he discussed his feelings over its broadcast in 2017.

Speaking on ‘Diana 7 Days’ with the BBC, he said he could “understand” why his mother had opted to go public on reflection.

He explained: “Having sometimes been in those situations, you feel incredibly desperate and it is very unfair that things are being said that are untrue.

“The easiest thing to do is just to say or go to the media yourself. Open that door. [But] once you’ve opened it you can never close it again.”

After his divorce, Charles later married Camilla in 2005.

Though their marriage was plagued with difficulties, Ms Simmons – who was also Diana’s healer – argued Charles and the People’s Princess’ relationship could have survived if they had spent longer getting to know each other.

She told the Daily Mail last year: “After the divorce Charles got a very good friend in Diana because she understood him.

“Nobody is happy if their other half has affairs, but she loved him with all her heart.

“If they had left it 10 years and then got married, I believe they would be together today.

“They would have had their differences, but I think they may have got back together.”