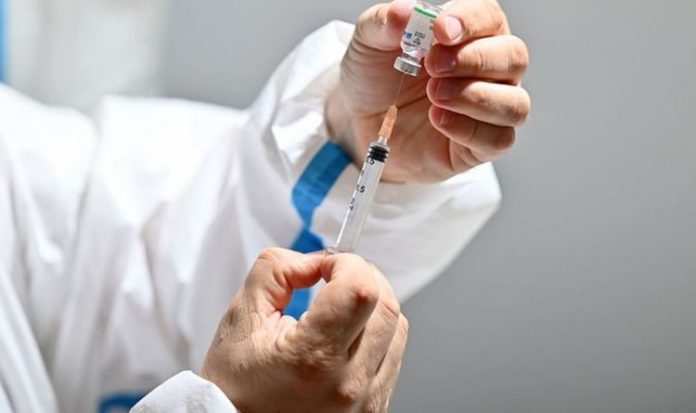 Clive Dix, chairman of the UK Vaccines Taskforce, said he is “very optimistic” of meeting the target. On BBC Radio 4’s Today programme yesterday Dr Dix said: “Every time we’ve been set an objective in the taskforce, we’ve met it and we will work day and night to ensure whatever the target that is feasible can be met.” Dr Dix denied second doses will slow the rollout. He said: “No, I’m confident that we are going to be supplying enough vaccine to roll out any type of protocol.”

Among those to get their first dose yesterday was TV’s Loyd Grossman, 70, right inset, at North Cotswold Hospital, Moreton-in-Marsh, Glos.

He said: “Get vaccinated! Not just for yourself, but for the safety and happiness of your family, friends and community.”

In a drive to protect the housebound, GPs are to be offered an extra £10 for every home visit they make. Some surgeries have been vaccinating more than 100 dementia sufferers a day while rural health teams have battled through heavy snow.

Another 18 large vaccination centres are to open from tomorrow. A temporary vaccination hub has been set up at the Colchester Community Stadium in Colchester below right.

People over 70 can arrange to be jabbed at a vaccine centre or pharmacy service or wait to be contacted by GP or hospital.

Dr Nikki Kanani, GP and NHS medical director for primary care, said vaccination was a priority for his colleagues across the country.

He added: “Please remember the NHS will be in touch with you when it’s your turn to be vaccinated.”

Yesterday, a makeshift centre was set up in East London Mosque inWhitechapel to ease mistrust in the Muslim community.

It came after medical officials in Tower Hamlets reportedly said only three out of 200 contacted had turned up for an appointment.

Worcestershire became the latest area to start surge testing after the South African variant was found in people with no international travel links.

READ  Meghan Markle news: When is the next time we will see Meghan, Harry and Baby Archie? | Royal | News (Reports)

A mobile testing unit was set up in a pub car park in Fernhill Heath, near Worcester.

A drive-through site is planned with door-todoor testing in the WR3 and some WR9 postcodes.

Dr Kathryn Cobain, the county’s director for public health, said: “I urge everyone offered a test to take it up to help us to monitor the virus in our communities and to help suppress and control the spread of this variant.”

Rapid testing is to be expanded to firms with more than 50 workers.

Health Secretary Matt Hancock said: “I strongly urge businesses and employees across the country to take up this offer of rapid testing to help stop this virus spreading further.”

cent and 25.1 percent in seven days. However an outbreak at Mossview Care Home in Lochgelly, Fife, killed 10.

Despite the fall in new cases, doctors warned intensive care wards were still under strain. Professor Anthony Gordon, an ICU consultant at St Mary’s Hospital in London, told the Today programme: “We are still very much in the thick of it.”

EU countries have only given the first dose to just under four percent of their populations compared with over 17 percent in the UK.

German finance minister Olaf Scholz told Today: “I’m angry about some of the decisions that were taken last year. I think there had been the opportunity to order more of the vaccines.”

But European Commission President Ursula von der Leyen writes today in a German newspaper: “The bottleneck lies elsewhere. Producing a new vaccine is an incredibly complex business.” She added the fight against the virus was “not a sprint, it is a marathon”.

Meanwhile, the World Health Organization expert team investigating the origins of the virus inWuhan said Chinese officials had granted all the access to people and sites they had requested.