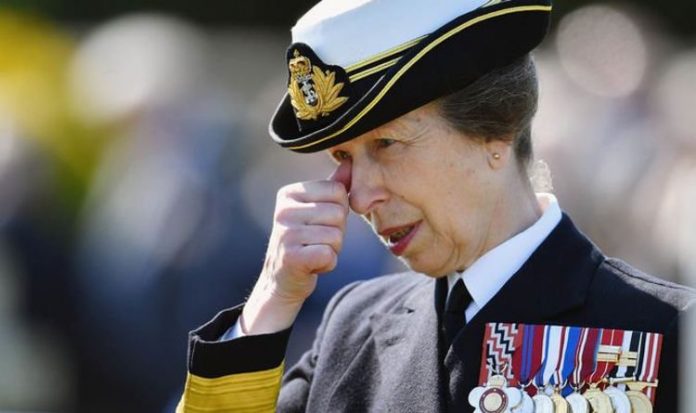 Hardworking Princess Anne could take even more organisations under her wing after the Queen decided Meghan and Harry could no longer hold royal patronages. The Princess Royal has been tipped as a possible successor of Prince Harry as Captain-General of the Royal Marines.

Another possible candidate is believed to be Prince William.

One royal expert has outlined concerns both these royals could struggle to juggle their current and future responsibilities.

The Daily Express royal correspondent Richard Palmer wrote on Twitter: “With no brother to help shoulder the burden of responsibilities, William is going to have a good deal on his plate.

“But how many extra responsibilities will Anne want to take on and for how long?

“For some in the forces, it’s a more important question than it might seem at first sight.

“When wounded troops came home from Afghanistan and Iraq, they were often happier to see members of the Royal Family visiting them in hospital than the politicians who had sent them there.”

Within a few years, the Duke will see his position within the Royal Family radically changed as he is destined to succeed his father as Prince of Wales at the end of the Queen’s reign.

Princess Anne, who has been on active royal duties for more than 50 years, holds more than 300 patronages, including 15 military ones.

The Princess Royal is one of the hardest working members of the Royal Family.

Even throughout the coronavirus pandemic, the Queen’s only daughter clocked up dozens of engagements and, splitting her working time between face-to-face visits and virtual engagements, she spent 145 days carrying out public duties.

The Queen announced on Friday Prince Harry and Meghan Markle were to relinquish all their military and royal patronages after saying they have no intention to return into the royal fold as full-time working members of the Firm.

Princess Anne news: Prince William has been tipped to become the next Captain-General of the Royal Marines (Image: GETTY)

The Duke of Sussex is giving up the three honorary military titles of Captain-General of the Royal Marines, Honorary Air Force Commandant of RAF base Honington and Honorary Commodore–in–Chief of Small Ships and Diving.

One senior Royal Marines source voiced the “disappointment” felt by the corps after losing the Duke of Sussex.

However, they also noted the Queen’s recent statement on Megxit has now broken the deadlock created last March, when the 12-month Megxit review started and Harry’s honorary military titles were put on hold.

The source told the Daily Express: “There is a palpable sense of relief at this official announcement, because we now finally know with certainty where things stand.

“The Duke of Sussex is a great chap and we are all disappointed he will not be coming back, but we must respect that, wish him well and move on.”

Maj Gen Julian Thompson – the former head of 3 Commando Brigade who led land forces to retake the Falklands in 1982 – spoke about what the role of Captain-General of the Royal Marines consists of.

He said: “Prince Phillip perfectly exemplified how the role should be carried out.

“When HMS Fearless and Intrepid returned to Portsmouth after the Falklands war Prince Philip, Captain General at the time, was there.

“And it was he who gave permission for us to keep the Argentine guns we’d captured, when the Director Royal Artillery expressed fears they could be seen as looted.

“These were tantamount to colours and a terrific coup. This is the kind of dedication the Royal Marines deserve.”

Prince Harry was passed on the role of Captain-General from Prince Philip in late 2017.

The Duke of Sussex is a veteran who served in the Army for 10 years and took part in two tour in Afghanistan.

While the Queen stripped the Sussexes of their royal patronages, the Duke of Sussex is retaining his links to organisations he founded himself or have no direct royal links such as the Invictus Games Foundation, through which he’ll continue to support sick and injured military personnel and veterans.