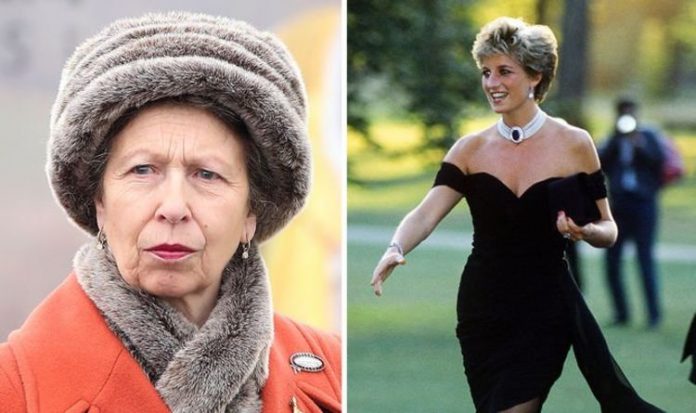 In The Crown season four, Anne, played by Erin Doherty, is portrayed as being jealous of Diana’s popularity. She moans to the Queen, played by Olivia Colman, how she is always unfavourably compared to the Princess of Wales both in terms of looks and personality. She admits that she would like some praise once in a while, and appears resentful of all the attention Diana gets, while her work is largely ignored.

“Do I get as much as a mention in any newspaper? Or a thank you? Do I heck!

“And yet all she has to do is put on a frock and she’s all over all the front pages and everyone’s falling over in shock at how wonderful she is.

“The only other young female in the family, against whom I am always compared.

Erin Doherty as Princess Anne in The Crown (Image: Netflix)

“Lovely her, dumpy her. Smiling her, grumpy me. Charming her, awful me.”

While the Netflix drama is a work of fiction, these comments were based on real things said by the Princess Royal at the time.

Indeed, these comments are very similar to something she once said to a colleague, according to Harry Arnold, royal reporter for .

Mr Arnold told the 2002 Channel 4 documentary ‘The Real Princess Anne’ that the Queen’s daughter once said: “I work hard every day.

Emma Corrin as Princess Diana in The Crown (Image: Netflix)

“I’m never in the paper, no one ever thanks me. All she has to do is show up.”

He added: “I think that sums up their relationship. Diana stole everyone’s limelight and Anne resented it.”

What’s more, it is true that the press often compared the two princesses in a way that was unfavourable for Anne.

For example, Diana started doing charity work with the Red Cross, and her warm, personable way of conducting engagements was a stark contrast to Anne’s stiff, business-like way with Save the Children.

Princess Diana was said to be “too tabloid” for Anne’s taste (Image: GETTY)

The media started suggesting that Anne should take a leaf out of Diana’s book, which made her angry, especially because she had been doing this work longer and was doing twice as many engagements as Diana every year.

However, Anne was not only resentful of the attention Diana received, she also reportedly disapproved of her more showbiz attitude and appeal.

“She said about them behind their backs several times: ‘those girls’,” the last phrase said sneeringly.

Mr Wood added: “She viewed them both as lessening the stature of the Royal Family. Too much tabloid for her.”

Anne was not the only one who appeared to resent Diana for stealing the limelight from other royals.

In The Crown, Diana is aware that Charles resented her taking all the attention during their 1983 tour of Australia.

Indeed, she goes to the Queen with her worries, who suggests that she might have been enjoying the attention “a little too much”.

Likewise, in real life, Charles felt overshadowed by his wife, according to the 2017 Channel 4 documentary ‘The Royal House of Windsor’.

Indeed, part of the reason he liked Camilla Parker Bowles ‒ now the Duchess of Cornwall ‒ is that she was happy to remain in the shadows, rather than steal his thunder.