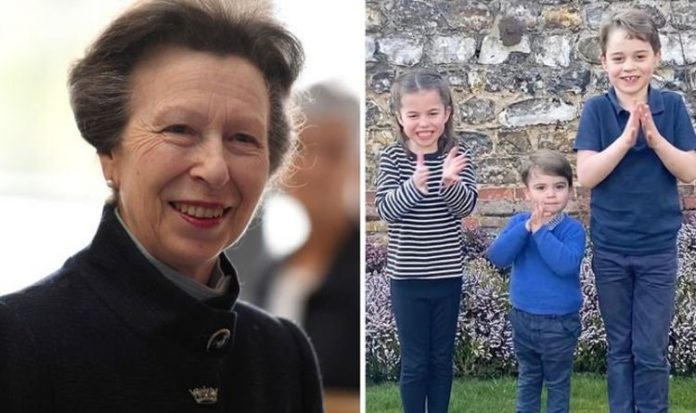 Princess Anne, 70, has dedicated her adult life to serving the crown and is widely praised for her extraordinary work ethic. Anne was born on August 15, 1950, two years before her mother, then Princess Elizabeth became Queen. A decision regarding Anne’s official title at the time changed the course of royal history forever.

The reason this was an extraordinary move was that, before Princess Anne, the child of a daughter of the monarch would not usually have been granted the title of princess or the style Royal Highness.

A 1917 royal warrant meant that until 1948 female members of the Royal Family could not pass on their HRH styles or Princess titles.

But on October 22 1948, letters patent were issued granting these to any children of Princess Elizabeth and Prince Philip.

Prince William is second-in-line to the throne and will one day be Britain’s king.

His eldest child Prince George is third in line to the throne and expected to take the crown from his father one day.

The precedent set following Princess Anne’s birth later ensured that no future British sovereign would be born without a royal style and title.

William’s two younger children – Princess Charlotte, five, and Prince Louis, two, also received royal titles at birth due to their place high up in the line of succession.

In the years to the come, the royal siblings could be bumped down the line by any children their big brother George might have.

While the law was changed to ensure Princess Anne received a title at birth, the royal renegade later became the first child of a sovereign to reject official titles for her children.

Anne decided against giving her children Zara Tindall, 39, and Peter Phillips, 42, titles choosing to raise them as private citizens instead.

Touching on this decision Mr MacMarthanne said:  “As with any action a precedent is set and the use and application of royal titles, or the granting of new titles, is a case in point.

“Clearly in recent years the decision not to accept, or use titles, has been driven by an understanding of the changing role of the monarchy, and the life a member of the family can expect to lead.

“In real terms, a title can prove more of a hindrance than a benefit. Accordingly, in a world less driven by social protocol and deference it seems imminently sensible that members of the family, who will not have a front line role, are not encumbered by the limitations a title might bring.”