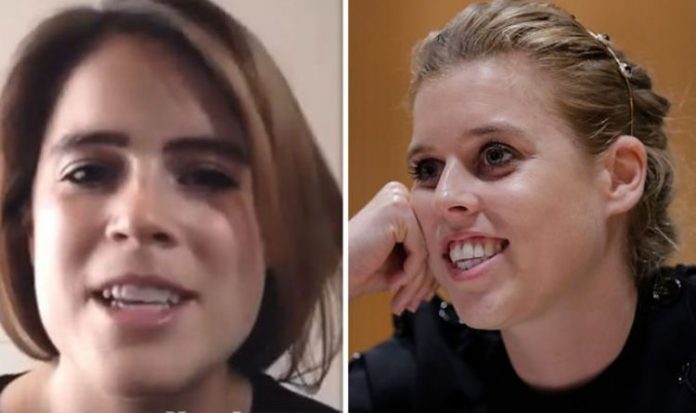 Princess Beatrice, 32, and Princess Eugenie, 30, are usually inseparable but the royal sisters have been kept apart by the current lockdown. On Tuesday morning Eugenie gave birth to a baby boy at London’s Portland Hospital to the delight of close Royal Family members and fans.

A Buckingham Palace announcement confirming the birth read: “Her Royal Highness Princess Eugenie was safely delivered of a son today, February 9, 2021, at 8.55am at The Portland Hospital.

“This is Princess Eugenie and Jack Brooksbank’s first child, The Duke of York and Sarah, Duchess of York’s first grandchild, and the ninth great-grandchild for The Queen and The Duke of Edinburgh.”

The statement added: “Her Royal Highness and her child are both doing well.”

Eugenie and her husband Jack Brooksbank are reported to have made Meghan Markle, 39, and Prince Harry’s UK home Frogmore Cottage their base ahead of welcoming their royal baby to the world.

While it is not known whether the new parents have returned to Frogmore or gone back their marital home at Kensington Palace following the birth of their son, the decision could affect how soon Princess Beatrice gets to meet her nephew.

There is a chance Eugenie could choose to have a christening for her son before lockdown ends.

Under current lockdown restrictions, more than two households are banned from mixing unless it is on a one-to-one basis for exercise outdoors.

However, some exceptions have been made in regards to communal worship and key life events which can include christenings.

The current Government guidance states some key events which include “an element of communal worship” may continue despite lockdown.

The official advice lists christenings among these events, stating: “Events to mark or celebrate a significant milestone in a person’s life, according to their religion or belief, such as events to celebrate a person’s birth (other than a birthday) or coming of age.”

The guidance adds: “Examples would include a christening or a naming ceremony.”

This means if Princess Eugenie decides to push ahead and christen her son before lockdown ends then Beatrice may be able to meet him at the church ceremony.

If Eugenie has returned to Windsor following the birth of her son then she may choose to have the christening at St George’s Chapel – a short distance from the Queen and Prince Philip at Windsor Castle and from her parents Prince Andrew, 60, and Sarah Ferguson, 60, at the Royal Lodge.

Beatrice and Edo may be permitted to make the short journey to Windsor in order to attend Eugenie’s son’s christening if takes place in the coming weeks.