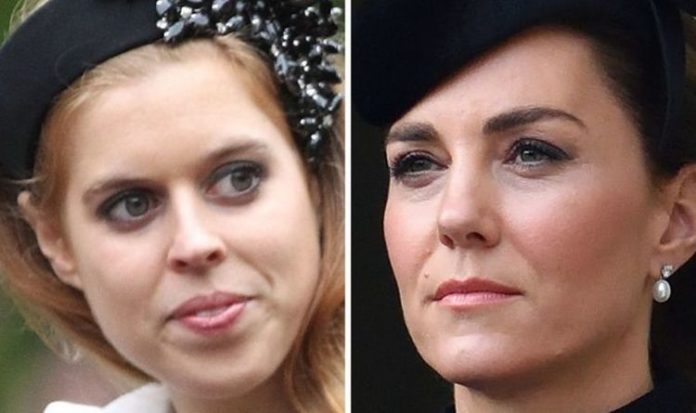 Royal Family life is extremely intricate and public. Much of what happens within the Firm seeps into public discourse. Royal feuds, therefore, have been rife throughout history.

The most obvious and recent falling out has been between Prince William and Prince Harry.

The brothers aren’t currently on talking terms, reports suggest, since Harry and Meghan Markle split from the Royal Family in January, choosing to move to the US.

And while feuds among immediate family members prevail, animosity between siblings and cousins do exist.

Princess Beatrice, the daughter of Prince Andrew, according to TheTalko, has something of a “disdain” for William’s wife, Kate.

Princess Beatrice: The Royal is said to have a ‘huge disdain’ for Kate Middleton (Image: GETTY)

Prince Harry: Harry and his brother William are thought not to be on talking terms at the moment (Image: GETTY)

This, the publication claimed, stems from the royal line of succession, and how Charles has beefed up his family’s odds in holding the throne for years to come.

It said: “Now that the rules of succession have changed there has been a significant wage gap between the royal siblings, and this rubs Prince Andrew and his children up the wrong way.

“Because of this Princess Beatrice has been at odds with her uncle and cousins for decades.

“It’s rumoured she has a huge disdain for Kate, and many speculate she’s just very jealous of the Duchess.

“All this being said, there might be some credibility to these rumours – when it came time to turn up to Prince George’s baptism, Prince Charles’ siblings were nowhere to be found.”

This was, TheTalko said, a result of Andrew’s dissatisfaction with Charles.

It explained: “He’s upset about the slimming of the succession for the Crown.

“Prince Charles has eliminated his siblings from being next in line for the Crown.

Royal cousins: Some of the members of the Firm at the Diamond Jubilee Concert in 2012 (Image: GETTY)

Royal news: Many have claimed that the cousins are often at odds with each other (Image: GETTY)

It is true that Charles’ immediate family have spent their entire lives preparing for their future roles.

William will almost certainly one day become King, and his wife Kate will be Queen consort.

Despite him being handed the keys to the monarchy, Charles’ upbringing is said to have been less than favourable to his later development.

TheTalko previously reported how his formative years were marred by an absence of both the Queen and Prince Philip.

Her Majesty is said to have once left both Charles and his sister Princess Anne while she toured the Commonwealth.

It said “Charles was never really close to his parents while growing up,” going on to say that it wasn’t until after the Queen had given birth to Andrew and Edward that she “dedicated more time to caring for her family”, going on to claim that Andrew was, in fact, the Queen’s favourite.

Charles and Andrew have an ongoing shaky relationship.

According to The Times, it was Charles who called his mother from his trip in New Zealand and advised her to strip Andrew of his duties after his “car-crash” interview with BBC Newsnight last year.

Despite TheTalko’s claim that Beatrice and Kate are at odds with each other, displays of familial affection between the two have been in abundance.

Although the Cambridge’s were not present at Beatrice’s low-key wedding earlier this year, the pair posted an image of the Princess and her husband Edoardo Mapelli Mozzi standing two metres from the Queen and Prince Philip.

Captioning the photo with a “Just Married” gif, they wrote: “Congratulations to HRH Princess Beatrice and Mr Edoardo Mapelli Mozzi who were married in a small private ceremony at the Royal Chapel of All Saints at Royal Lodge, Windsor on Friday!”

It proved that the family remained close despite the distance imposed by the coronavirus pandemic and subsequent lockdown.