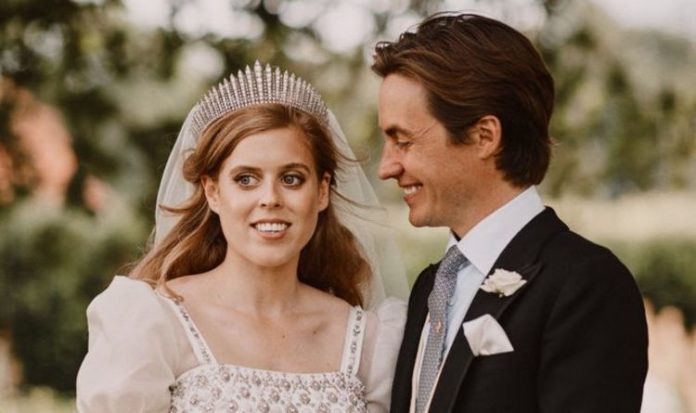 When Princess Beatrice married Edoardo Mapelli Mozzi earlier this year, she gained a new title to add to her name. But with her new husband Edo, already titled in his native Italy, the rules are slightly different when a man marries into the Royal Family.

The pair secretly wed in a private ceremony in Windsor following the cancellation of their original wedding due to take place on May 29.

The original wedding was planned to be a large affair, but the newlyweds opted for a slimmed down private ceremony in line with current Government coronavirus regulations.

Beatrice and Edo’s wedding took place just a few miles away from the Royal Lodge, the Yorks’ residence.

Princess Beatrice, 31, and Edo, 37, kept the plans quiet in comparison to other recent royal weddings, and the ceremony had only 20 guests.

The long-awaited wedding took place at the Chapel of All Saints, which is on the Duke and Duchess of York’s Windsor estate, the Royal Lodge.

Government regulations had, and still do, a cap on how many people can attend a wedding, after months of ceremonies being unable to take place due to COVID-19.

The Queen and Prince Philip attended the ceremony along with the bride’s parents Sarah Ferguson and Prince Andrew, who reportedly gave his daughter away.

Edoardo is the son of Italian Count and former Olympian Alessandro Mapelli Mozzi and his previous wife Nikki Williams-Ellis.

What is the husband of a Princess called?

The husband of a woman who is a part of the Royal Family can be given a title, but this is not common.

In recognition of his status, a prince consort may be given a formal title, such as prince or prince consort, with prince being the most common.

However, most monarchies do not have formal rules on the styling of princes consort, thus they may have no special title.

Jack Brooksbank was not given a prince title when he married Eugenie, and it has been the same case for Edo.

Edo is descended from the now defunct Italian Royal Family, which came to an end following World War II, but one of his ancestors was given a Conte, or Count, title back in the early 20th century.

As Edo is a member of the now abolished Italian Royal Family, hereditary titles are not officially used or recognised in the country – they may still be used as a courtesy, but have no legal standing.

He cannot claim the title in the UK, due to a law that prevents foreign nobility claiming titles without a special warrant.

Edo’s claim to the title of Conte goes all the way back to his great-grandfather Conte Alessandro Mapelli Mozzi, who was given the title in 1913.

Before this, his family were “nobili”, or noblemen, which was a more minor title.