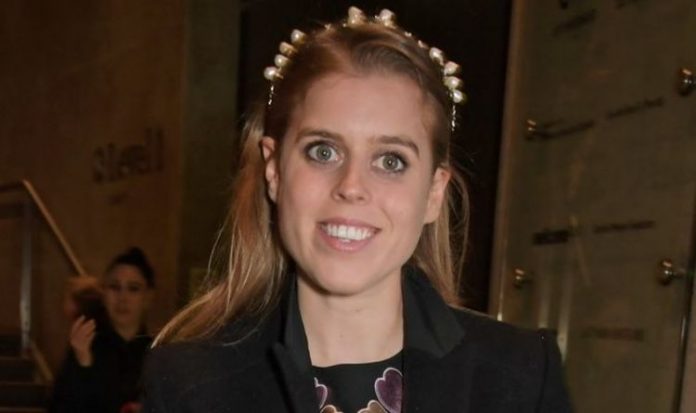 The Duchess of York sent the stunning snap as a thank you card to a royal fan. The picture shows Beatrice and Mr Mapelli Mozzi, known as Edo, in a romantic embrace on their big day.

The newlyweds have their heads together as they enjoy a touching moment in the black-and-white photo.

The picture prompted a delighted reaction from other Instagram users.

One wrote: “The most beautiful of all the Royals on her wedding Day.”

Another commented: “So very gorgeous photo thank you.”

A third gushed: “Reminds me of old black and white photos of royal brides from the 1900s, so lovely!”

It is the latest picture to emerge from Beatrice’s royal wedding in July.

The blog, Royal Responses, has also revealed a beautiful snap of the Queen’s granddaughter and the millionaire property tycoon sent by Sarah as a thank you for their kind wishes on Beatrice’s wedding.

READ MORE: Another royal wedding has happened under the radar

In an unusual move, their July nuptials were not announced in advance, the ceremony was held in private and pictures of the event were not immediately released.

In a statement, Buckingham Palace said: “The couple decided to hold a small private ceremony with their parents and siblings following the postponement of their wedding in May.

“Working within Government guidelines, the service was in keeping with the unique circumstances while enabling them to celebrate their wedding with their closest family.”

The Queen and Prince Philip were among guests at the low-key wedding.

Prince Andrew, who stepped back from royal duties after his disastrous Newsnight interview about his relationship with Jeffrey Epstein, walked his daughter down the aisle.

The bride stunned in a vintage dress and glittering tiara – both borrowed from the monarch.

A series of pictures from the royal wedding were released by Buckingham Palace.

The property tycoon proposed to Beatrice, who is ninth in line to the throne, during a trip to Italy.

Their families have known one another for years and they began dating in autumn 2018 after meeting again at Princess Eugenie’s royal wedding.