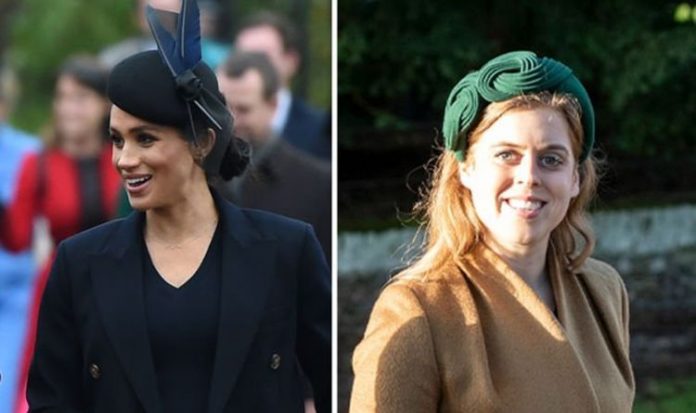 Beatrice and Edoardo are believed to have began dating in 2018, after knowing each other for years. But the royal couple, who married in a small ceremony earlier this year broke tradition by attending a royal event before being married. Beatrice’s breach of royal conduct followed Harry and Meghan doing the same thing two years earlier.

Whilst the couple were engaged and were wedded less than a year afterwards, tradition stated only members of the Royal Family join in for the festivities.

Beatrice and Edoardo enjoyed the holidays with the Royal Family before marrying on July 17 this year.

Due to the coronavirus pandemic, the couple held a smaller ceremony at the Royal Chapel of All Saints at the Royal Lodge in Windsor, with less than 30 royals in attendance.

But Harry and Meghan were the first to break this protocol, with the Prince inviting his then-fiancee to Sandringham in 2017.

The Sussexes were set to be wed in 2018, but the American Duchess-to-be joined the Royal Family for a three-day celebrating in Norfolk.

Despite breaking protocol, PR advisors insisted at the time Meghan’s attendance at the royal Christmas celebration was necessary to avoid a row.

Both Meghan and Edoardo enjoyed Christmas with the Royal Family whilst not being royals themselves, but Kate, the Duchess of Cambridge and Mike Tindall were not afforded the same luxury.

Mr Fitzwilliam went on to explain that Meghan’s early invite was “pivotal” in ensuring the Royal Family welcomed her in “as soon as possible”.

He added: “Kate and the younger members will help her through the strict protocol of the royal festive celebrations which take place over three days and which can be daunting…

“During the celebrations Meghan will get to know the royal family much better.”

Channel 4’s ‘A Very Royal Christmas: Sandringham Secrets’ also saw royal commentator Richard Kay add: “I imagine it must have been an incredible ordeal for Meghan, being introduced not just having to get used to these sort of foreign traditions, but then the whole obligations that come with celebrating with the Royal Family where everything has to be just so.

“She would have been very worried, I’m sure, about putting a foot wrong.”

This year will see a huge scale back in the royal Christmas celebrations, due to the coronavirus pandemic.

UK Government guidelines allow for three households to mix indoors from December 23 to December 27, meaning the Royal Family will be unable to meet up en masse this year.

Queen Elizabeth II and Prince Philip, as a result of the restrictions, will skip the annual trip to Sandringham Estate in favour of staying at Windsor Castle for the first time in 33 years.

A Buckingham Palace spokesperson said earlier this month: “Having considered all the appropriate advice, The Queen and The Duke of Edinburgh have decided that this year they will spend Christmas quietly in Windsor.”