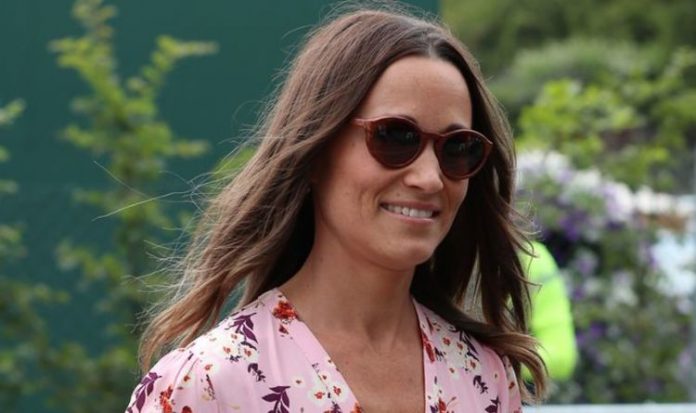 Kate Middleton’s sister gave out awards to children at the school for deaf pupils in Newbury ahead of their Christmas holidays. The school shared on its Twitter account a photograph of Pippa wearing a festive jumper in front of her decorated Christmas tree.

The tweet read: “Well done to all our primary and secondary pupils who received awards today for their Christmas card designs from our Ambassador #PippaMiddleton.

Pippa is reportedly “thrilled” to be expecting her second child with husband James Matthews.

The couple, who are parents to two-year-old Arthur, tied the knot in May 2017.

A source close to the Middleton family told Page Six how the family took the good news.

The insider said: “Pippa and James are thrilled, it’s fantastic news amid a difficult year.

“The entire family is delighted.”

The couple have led a private life, but Pippa featured in iconic photographs as Kate’s maid of honour at the royal wedding.

“And I think that’s really the heart for all of us is having a really close family that we can sort of be normal with each other, treat each other normally. And that’s sort of kept us all, you know, affixed to the ground.”

But Pippa’s own wedding also became a hot topic after its sky-rocketing cost was revealed.

According to reports, the Middletons and Matthews paid for the major event, but some critics condemned their spending.

ITV’s Loose Women was one of the TV shows to analyse the ceremony, which cost £250,000, or as Ruth Langsford described it, “the price of a house”.