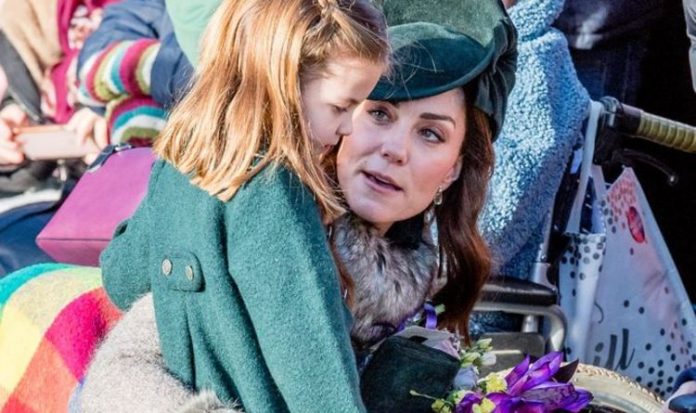 Kate, Duchess of Cambridge, was spotted with her children, George, Charlotte and Louis, in a local Sainsburys near the family’s Norfolk home. However, despite the appearance exciting royal commentators, it also left them seriously “confused”. Royally Obsessed podcast hosts Roberta Fiorito and Rachel Bowie discussed the outfits worn by Charlotte and Kate.

Ms Fiorito told listeners: “Kate’s worn clothes from Sainsburys before and used it a lot with Prince Louis.

“The interview about her being at Sainsburys was actually from Kate Carter, who’s the founder of Ugly Duckling Creations.

“She’s the one that saw her in the shop and was pretty shocked to see her there.

“But Kate of Ugly Duckling Creations mentioned that Charlotte was out in her forest green coat, the one she wore at Christmas.”

Ms Bowie said: “I was confused. How is that possible, it’s August?

“I was wondering if this was from a previous time and it had just gotten picked up.

“But we did some digging and it was actually a pretty chilly week in the UK last week.

“I feel like that makes sense but I feel like a wool coat is still a little intense for August.”

Ms Carter, who has spotted the family, told Hello: “Kate was with the children, and she looked lovely.

“She is absolutely beautiful, and the children were beautiful. They were so well behaved.

“I noticed Charlotte first as she had the beautiful green jacket on that she wore at Christmas.

“Then I saw Kate, who had Louis in her arms and I thought ‘Am I the only one seeing this?’ I couldn’t believe it was happening.

“Charlotte was looking at the dresses, she was dead cute.”