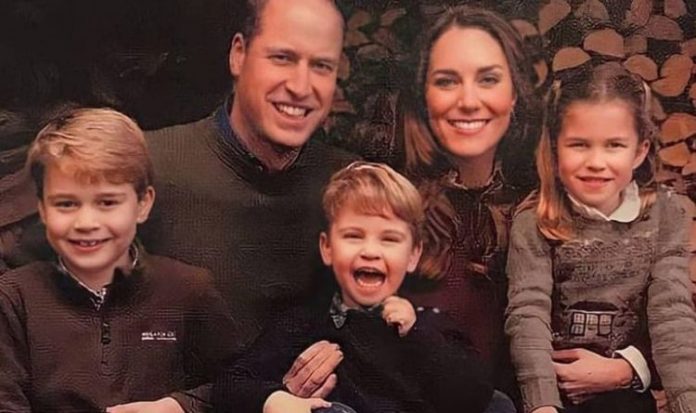 A never-before-seen picture of the Cambridges shows the happy family sitting on hay bales with a pile of wood behind them. This relaxed picture, shared by a royal fan group on Facebook, appears to have been included in Kate and Prince William’s Christmas card for 2020.

The snap shows five-year-old Princess Charlotte looking straight into the camera lens with a cheeky smile while she sits on the Duchess of Cambridge’s lap.

Prince Louis, two, stands between the legs of his father Prince William while he laughs with his eyes almost closed in an expression of pure bliss.

And Prince George, who turned seven in July, smiles as he leans with one arm on his beloved dad.

In the picture, Kate and William smile as they sit close to one another.

This picture has not been released by Kensington Palace and it is not known when or where it was taken.

Every member of the Cambridges’ family wears a cosy winter jumper, leading to believe the photograph is fairly recent.

The card hasn’t been sent to an individual but is addressed “to all the amazing NHS staff”, the Daily Mirror wrote.

It bears the message: “Wishing you a very Happy Christmas and New Year.”

A royal fan account called Royalty101 – Past and Present, shared this card on Facebook, adding: “2020 Christmas Card of The Cambridge Family”.

Royal fans appeared to love the informal snap, as the post has gathered more than 1000 likes within hours.

One commented the picture saying: “Such a wonderful photo of the family.”

Another said: “Kate and William have the most beautiful children.”

A third, referring to Prince Louis, added: “I just love that little one, always smiling”

Kate, Prince William and their children have spent several months at Anmer Hall, their Norfolk residence close to the Queen’s Sandringham House.