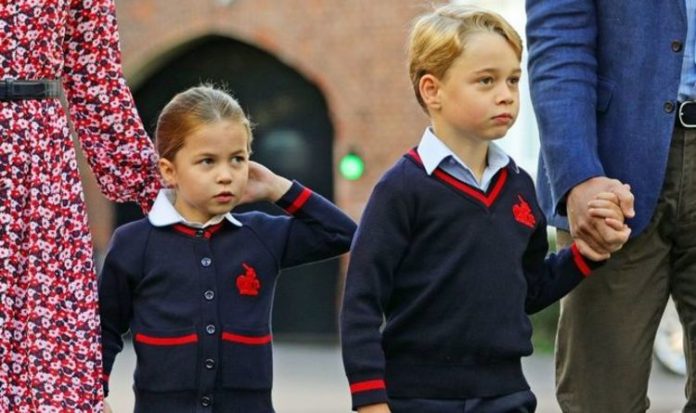 Parents Kate, Duchess and Cambridge, and Prince William spent the spring and summer months educating their children while schools were shut due to the coronavirus pandemic. But from Monday September 7 Princess Charlotte, five, and Prince George, seven, returned to their school, Thomas’s Battersea and the two siblings were said to be “thrilled” to return to the classroom.

But due to the new coronavirus restrictions put in place to protect both staff and pupils the young royals are unable to participate in one of their favourite hobbies.

The new rules mean some of their lessons have been cancelled, such as swimming.

Writing for Vanity Fair, royal expert Katie Nicholl said: “While Kensington Palace did not release any images of the children’s first day back, George who has moved into Year 3 and Charlotte who is in Year 1 are said to be thrilled to be back at school with their friends, even though some activities such as swimming have been suspended.”

The two young royals are believed to be keen swimmers, which forms part of the school’s physical education programme.

Prince William has previously dubbed the royals a “family of swimmers” and said his two eldest children love the sport.

He made the comments when he met with Eileen Fenton, who was the first woman to ever compete in the Cross Channel Swimming Race in 1950, last November.

The professional swimmer, who is now 91, said of her meeting with the Duke: “He said that he and his wife make sure the children can swim and they all go and they swim quite well.”

Ms Fenton added: “I can remember seeing when the Queen was young and her sister Princess Margaret— we used to see them swimming in pictures.

JUST IN: Queen changed law so Prince George, Charlotte and Louis got titles

Prince Louis, two, is still too young to go to school but is expected to follow in the footsteps of his two siblings and also attend Thomas’s in Battersea.

The Cambridge’s youngest child will be of school age for the 2022 Michaelmas term.

During lockdown, Kate opened up about the pressures of homeschool.

She told the BBC in April it got “hectic” having George, Charlotte and Prince Louis all in the same house all the time.

She added: “Children have got such stamina. I don’t know how, honestly.

“You get to the end of the day and you write a list of all the things you’ve done in that day.”