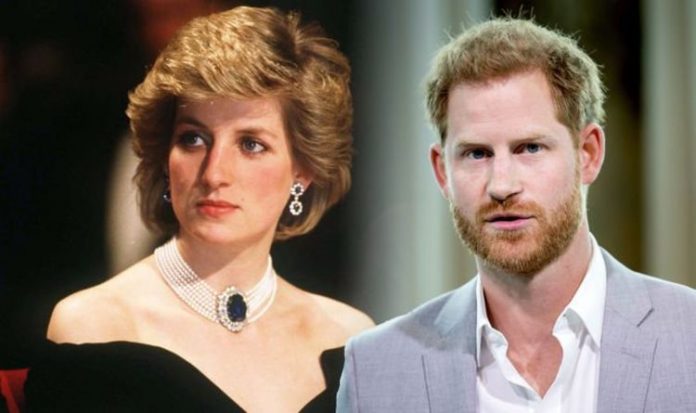 Prince Harry, 36, and Meghan Markle, 39, are expected to shed new light on their time as working royals in what is being touted as a sensational sitdown interview with USA chat show host Oprah Winfrey. Two teaser clips of the CBS special have been released ahead of it airing this Sunday and in one of them, Prince Harry speaks about his mother Princess Diana.

In the 30-second trailer, Harry says to Oprah: “I’m just really relieved and happy to be sitting here, talking to you, with my wife by my side, because I can’t begin to imagine what it must have been like for her, going through this process by herself, all those years ago.

Reacting to Harry’s words, one royal commentator has claimed that while the Duke is “haunted” by his late mother’s plight, their struggles as working royals were markedly different.

Royal commentator Richard Fitzwilliams told Express.co.uk: “There is no doubt whatsoever that Harry is haunted by what happened to Diana.”

READ MORE: Meghan and Harry’s interview ‘should be postponed out of respect’

He added: “When he tells Oprah in the trailer for their interview that he is afraid of the past repeating itself, he means it.

“Of course he is right to be protective of his family and his own mental health.”

While Mr Fitzwilliams believes Harry is justified in his wish to protect his family’s privacy, the expert points out that the landscape has dramatically changed since Diana was at the height of her fame.

The expert added: “However, it should be borne in mind that the terrors of the paparazzi are now far less than when Diana was alive.”

He said: “The interview with Oprah was an appalling idea as what they reveal in it may affect their relationship with the rest of the royal family for the foreseeable future.”

He added: “CBS has invested a good deal in Sunday’s interview now extended by 30 minutes to two hours.”

READ  BREXIT BREAKTHROUGH: Brussels on the brink of a climb down over Irish border row | Politics | News - UK

The royal commentator called for the programme to be postponed as a mark of respect to Prince Philip, 99, who remains in hospital where he is being treated for an infection.

On Monday the Palace confirmed the Duke had been transferred from King Edward VII Hospital to St Batholomew’s where he was having tests for a pre-existing heart condition.

Mr Fitzwilliams added: “However the bulletin today about Prince Philip’s health should mean that, if humanly possible, it should be postponed.