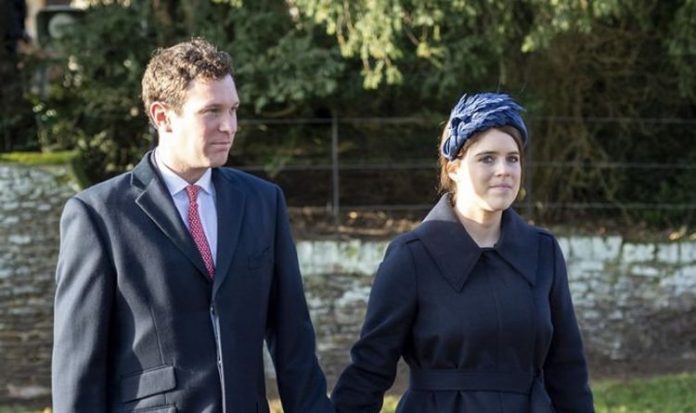 Reports claim the Royal couple’s baby will be born in mid-February, after they announced Eugenie was pregnant in September. Taking to her Instagram, Eugenie said at the time: “Jack and I are so excited for early 2021….” Historically, royals have to abide by a set of rules for the birth of a baby, including regulations on town criers and strict secrecy.

Pregnancy announcements are usually made 12 weeks, at the end of the first trimester.

Royal staffers on hand to deliver the baby must keep details of the pregnancy secret until an official announcement is made.

When Catherine, the Duchess of Cambridge gave birth to Prince George in 2013, she had a massive 20 person team of experts.

Queen Elizabeth II must also be the first royal to know about the birth of a royal baby before any official announcement is made.

Prince William used an encrypted phone to call his grandmother about George’s birth after several hours.

Vanity Fair reported at the time Kate’s family, Prince Charles and Camilla, the Duchess of Cornwall and Prince Harry were then called later.

After the royals are informed about a birth, a town crier shouts the news outside of the hospital, and an easel with details of the baby is placed outside of Buckingham Palace.

Eugenie has also been tipped to want a more “private life” for her and Jack’s baby.

Marlene Koenig, royal expert, said to Express.co.uk Eugenie is in a better position to give her child a “peaceful life” as the “baby will be a great-grandchild of a sovereign, not even a grandchild of the sovereign”.

Cosmopolitan also reported: “Eugenie knows a title can be a curse as well as a blessing, and she and Jack want their child to live an ordinary life and eventually work to earn a living.