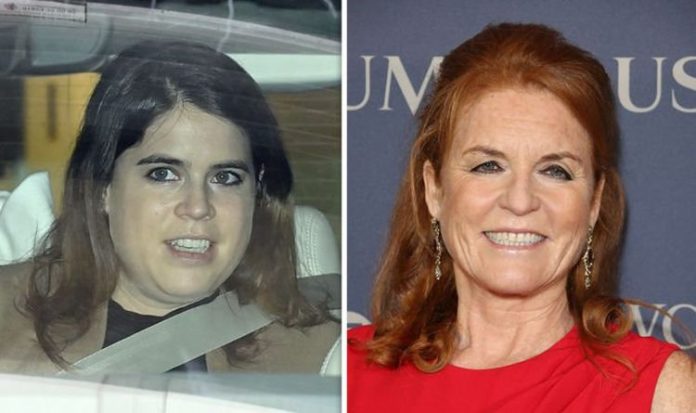 Eugenie had her baby at The Portland Hospital in London with her husband Jack Brooksbank by her side, nearly a year and a half after the pair got married. The Royal Family are said to be “delighted” by the news, including Eugenie’s parents Prince Andrew and Sarah Ferguson ‒ affectionately known as Fergie ‒ and her grandparents, the Queen and Prince Philip. It has been seven days now since their bundle of joy was welcomed into the world and there is still much speculation about what the name will be.

Eugenie will need to be careful with her choice, because the Queen previously stepped in and rejected her parents’ choice of name when her older sister Princess Beatrice was born in 1988.

According to reports at the time, the Duke and Duchess of York were unable to agree on what to call their daughter, so the Queen put her foot down.

Fergie wanted to call her first-born Annabel, but the Queen thought it was too “yuppy”, a derogatory term of a young middle-class person with a well-paid job, perceived as obsessed with material possessions and financial success.

It is possible the Queen may have been thinking of the Mayfair private club Annabel’s, a favourite haunt for some younger royals.

READ MORE: Princess Eugenie’s luxury stay at hospital could have cost up to £500k

Due to this row, Beatrice’s name was not announced for an entire two weeks.

It is believed it was Her Majesty who suggested the name Beatrice, which was also the name of Queen Victoria’s youngest child.

Beatrice’s full name is Beatrice Elizabeth Mary, with her middle name a touching tribute to her grandmother, Queen Elizabeth II, and her great-grandmother Queen Mary.

In fact, every couple in the Queen’s immediate family has chosen to give one their female children the middle name Elizabeth in tribute to the monarch.

Eugenie has already taken longer than other royal couples in announcing her baby’s name.

Prince William and Kate, Duchess of Cambridge took only two days to announce Prince George and Princess Charlotte’s names, although they were little longer with Prince Louis.

It took Prince Charles and Princess Diana a week to confirm Prince William’s name in 1982, but less than 24 hours after Harry was born two years later.

On the other hand, the Queen and the Duke of Edinburgh did not share Prince Charles’ name for a whole month after his birth in 1948.

Royal fans are still eagerly guessing what Eugenie and Jack will name their little boy, with the bookmakers’ frontrunners being Philip, Arthur and Oliver.

Royal expert Emily Andrews claimed in the Daily Mail that the parents will choose the middle name Stamp for their son, paying tribute to Stamp Brooksbank, Jack’s 4x great-grandfather, who was a Governor of the Bank of England in the mid-18th Century.

After her baby was born at 8:55am on February 9, Eugenie posted a photo on Instagram of his tiny hand, with hers and Jack’s alongside.

Underneath the black and white picture, she put three blue hearts, indicating the baby’s sex.

The princess had her baby in the same hospital where she and Beatrice were born in 1990 and 1988.

The Portland Hospital is an American-owned private hospital where maternity stays cost £20,000 on average, but can cost as much as £500,000.

She and Jack were pictured leaving hospital on Friday, Eugenie wearing a camel coat and tartan dress, sitting on the back of her car with her newborn while Jack drove.

Eugenie waved as the happy couple drove away and headed for their home at Frogmore Cottage.

The new royal baby is 11th-in-line to the throne, but will move down when Harry and Meghan have their second child.

The Sussexes announced over the weekend that they are expecting.