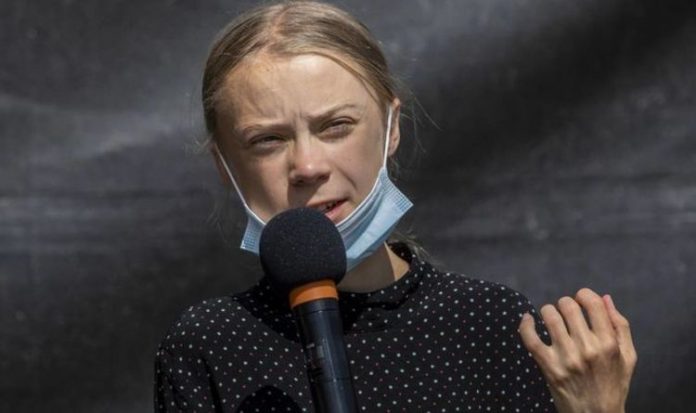 Greta Thunberg slams EU for ‘giving up’ on climate change

Greta Thunberg: A Year To Change The World is to set to broadcast on BBC One later this year. The programme will follow the Swedish activist’s mission to raise awareness about the need to drastically reduce carbon emissions. The 18-year-old will travel to different countries around the world to see how climate change is spiralling out of control, including coal mines in Europe and a trip to Canada’s oil industry.

They tweeted: “You pay. They preach.

“Switch to on-demand and do your bit to #DefundTheBBC by legally cancelling your TV licence.”

One person wrote: “I won’t be watching.”

The BBC has been criticised over a new Greta Thunberg documentary (Image: GETTY)

Another added: “What makes Greta Thunberg such an expert?”

A third social media said: “Just cancel it and watch what you like, why should they dictate to us?”

Filming for the documentary started in 2019 when Ms Thunberg, who was then 16 years-old, took a year off school to spread her environmental message.

Even though she was unable to travel abroad last year due to the Covid pandemic, the camera crew still followed her in Sweden.

The programme will follow the Swedish activist’s mission to raise awareness about climate change (Image: GETTY)

She rose to fame in 2015 in her home country when she started to strike from school.

Since then, she has faced ridicule from some world leaders, including former US President Donald Trump, Russian President Vladimir Putin and Brazilian leader Jair Bolsonaro.

Ms Thunberg responded that politicians attacking her was just a diversion tactic.

She told the Times: “Since people are so desperate not to talk at any cost about the climate crisis, they are going to try to do everything to distract.

“Instead of speaking about the climate crisis they are going to try to make this a debate about me or my personality or my appearance or my parents or my sister or whatever, so you just have to come to terms with that very early on.”

Government officials and the BBC have since been in talks about how to “further support older people” ahead of the increases.

Baroness Stedman-Scott, Welfare Minister, said: “We have written to the BBC.

Greta rose to fame in 2015 in Sweden when she started to strike from school. (Image: GETTY)

“Officials have had a meeting with its representatives and we are awaiting the outcome of that meeting.

Lord Ian Botham also wrote to BBC Director General Tim Davie to make a pledge no over-75s would be prosecuted for failing to pay the licence fee.

The retired cricketer and Life peer said in the letter: “In my view, this is institutional bullying on a massive scale and there seems to be some kind of blame game between the BBC and government.

The BBC defended the licence fee for ensuring the corporation serves “all audiences” (Image: GETTY)

A release date for Ms Thunberg’s documentary series has not yet been confirmed.

The broadcaster previously defended the licence fee for ensuring the corporation serves “all audiences”.

A BBC spokeswoman told Express.co.uk: “The licence fee continues to ensure the BBC is an independent, universal broadcaster, committed to serving all audiences and investing in British creativity.