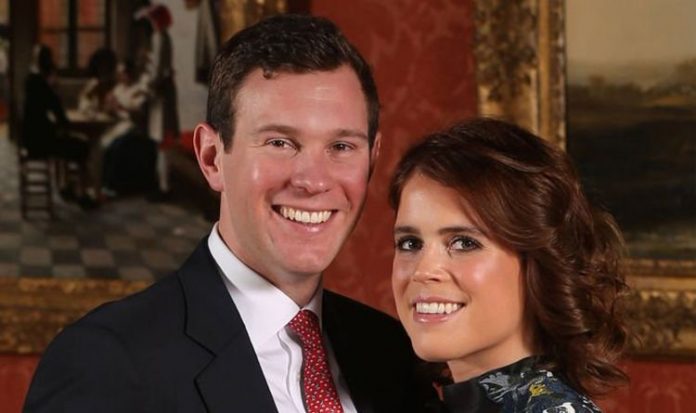 The child was born on Tuesday at 8.55am at London’s Portland Hospital. Eugenie did release a black and white photo of one of the child’s hands, being held by an adult, on her Instagram account.

However Phil Dampier, who has written a number of books on the Royal Family, argued the public are “probably entitled to see proper pictures of her baby” due to the amount of public money spent on her 2018 wedding.

The event cost the taxpayer around £2 million, with Thames Valley Police being responsible for security.

It was televised live on ITV after the BBC decided not to broadcast the event.

Speaking to the Telegraph Mr Dampier said: “Eugenie did have quite a lavish wedding, therefore the public are probably entitled to see proper pictures of her baby rather than an Instagram image of her fingers.

“The younger generation of royals does want to do things on social media” (Image: GETTY)

Eugenie posted a black and white picture of her son’s hand on Instagram (Image: Instagram/princesseugenie)

“It’s a difficult balance to strike when you have a royal couple seeking publicity on the one hand, but privacy on the other.”

Eugenie’s birth was officially revealed by a Royal Family statement later on Tuesday.

It said: “Her Royal Highness Princess Eugenie was safely delivered of a son today, 9th February 2021, at 0855hrs at The Portland Hospital. Jack Brooksbank was present. The baby weighs 8lbs 1oz.

Ingrid Seward, Majesty magazine editor-in-chief, argued the photo Eugenie posted on Instagram showed how younger royals are increasingly using social media rather than traditional outlets to communicate with the public.

Addressing the Telegraph she said: “Eugenie’s had a really privileged life, she’s never, ever had to rough it.

“Exotic holidays, living in palaces – you name it.

“But I don’t necessarily think she is consciously backing away from royal tradition; I think it’s just the era that she’s in.

“The younger generation of royals does want to do things on social media.

“It’s arguably easier to control the narrative that way.”

Princess Eugenie was born at Portland Hospital in 1990 (Image: EXPRESS )

The same venue was used earlier in the year for Prince Harry’s wedding to American actress Meghan Markle.

However whilst the wedding itself was paid for privately there was controversy over the amount of public money spent on security.

It was attended by a number of prominent public figures including Naomi Campbell, Stephen Fry and James Blunt.

Republic, which wants to replace the monarchy with an elected head of state, organised a petition asking the House of Commons to remove public funding.

It received around 50,000 signatures, with several Labour MPs making the same argument.

A freedom of information request revealed the Metropolitan Police spent £6.35 million providing security for the Duke and Duchess of Cambridge’s wedding in 2011.

According to Anthony Stansfeld, Thames Valley police and crime commissioner, “between £2 million and £4 million” was spent securing Meghan and Harry’s wedding.