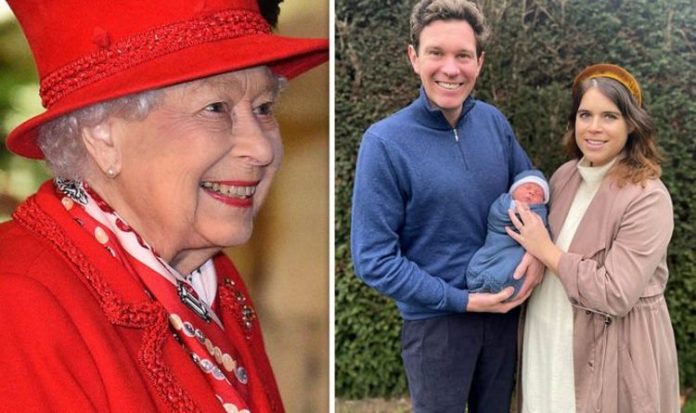 Princess Eugenie, 30, and her husband Jack Brooksbank, 35, delighted royal fans at the weekend with an adorable baby name announcement on Instagram. As well as revealing they had called their son August Philip Hawke in a touching nod to Eugenie’s grandfather the Duke of Edinburgh, 99, they shared three new photos of themselves with their baby boy.

Eugenie is a keen social media user and is the first-ever British royal to make a baby name announcement on Instagram.

Her post read: “We wanted to introduce you to August Philip Hawke Brooksbank…

“Thank you for so many wonderful messages. Our hearts are full of love for this little human, words can’t express.

“We are excited to be able to share these photos with you by our wonderful midwife.

“Thank you to the wonderful essential workers including our midwife who came to discharge our boy.”

Fans gushed over the post with many praising the name choice as a touching tribute to the Duke of Edinburgh who is currently in hospital in London after he was admitted “as a precautionary measure” last Tuesday.

Will Eugenie’s baby have a royal christening?

While Eugenie is not a working royal she is 10th in line to the throne and is still entitled to enjoy several royal privileges.

In October 2018, Eugenie and Jack had a lavish royal wedding at St George’s Chapel Windsor just months after sixth in line Prince Harry, 36, and Meghan Markle had tied the knot at the same spot.

The government’s definition of “significant life cycle events” reads: “Events to mark or celebrate a significant milestone in a person’s life, according to their religion or belief, such as events to celebrate a person’s birth (other than a birthday) or coming of age.

“Examples would include a christening or a naming ceremony.”

While Eugenie could technically rush through a royal christening before lockdown is lifted she is likely to wait until more Royal Family members are able to attend.

Eugenie and Jack are currently based at Frogmore Cottage, a short distance from Windsor Castle where the Queen and Philip have spent the best part of the pandemic.

The new parents may choose to christen August at St George’s Chapel in Windsor in order that the Queen and Philip can attend.

Baby August’s christening is highly unlikely to go ahead until Prince Philip has been discharged from hospital.

While Buckingham Palace has given no new update on the Duke’s health since he was admitted last week, on Monday Prince William said his grandfather was “doing OK.”

Speaking on a visit to a vaccination centre in Norfolk, Prince William also told reporters that doctors were “keeping an eye” on his grandfather.