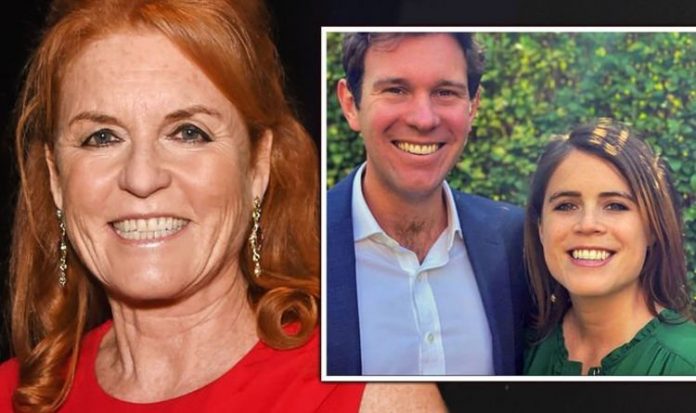 Princess Eugenie’s mother Sarah, Duchess of York, confessed she is working hard to create a “lovely library” for her grandchild and plans to have “story time” sessions with the baby. Sarah, also known by her fans and friends as Fergie, is so excited for the arrival of Eugenie’s first child she has already prepared a present.

Speaking about her new book ‘The Adventures of Charlie, Blue and Larry the Lamp Post’, Fergie said: “This book will be dedicated to my first grandchild.”

The Duchess is already gearing up to welcome more little ones in her family.

She added: “I am bringing out one children’s book a month for the next 12 months to create a lovely library for my grandchildren.”

Fergie, who has been writing children’s book since the 1990s and in the midst of the first national lockdown launched a YouTube channel dedicated to entertaining children, said she sees herself as a “fantastic” grandmother.

Princess Eugenie baby: Eugenie and Jack announced they were expecting a child with a post on Instagram (Image: PRINCESS EUGENIE/INSTAGRAM)

Speaking to Us Weekly, the Duchess of York added she is looking forward to having “story time” with Eugenie’s baby.

Discussing her work with children, Fergie added: “I feel like the luckiest person ever when I can bring a smile to a child’s face.”

Fergie launched her project ‘Storytime With Fergie and Friends’ on YouTube last April and has been releasing a new video at 4pm every day since.

READ MORE: Harry has ‘new optimism’ after he ‘struggled to get out of bed’ -claim

In her videos, Fergie can be seen reading a children’s story, virtually hosting a guest reading to children or making “fun food art” such as a pepper train – peppers linked to one another filled with celery, carrot and cucumber sticks.

In a clip introducing the channel to viewers, Fergie said: “Hello everybody.

“It’s so exciting because I’m in my favourite place ever, ever, and ever and that’s with children – and I’m thinking of all children out there that just need a little bit of magic.

“You haven’t to worry, they’re not very long books – well they could be long books – let’s get a bit of magic going here shall we!”

Princess Eugenie baby: Eugenie and Jack’s baby is due in early 2021 (Image: GETTY)

Princess Eugenie and her husband Jack Brooksbank announced in late September they were expecting their firstborn.

The couple excitedly shared the news on Instagram, where Eugenie and Jack published a picture of themselves smiling and another in which they held a pair of baby’s shoes.

The caption hinted at the due date, reading: “Jack and I are so excited for early 2021…”

On the same day, Buckingham Palace issued a more official statement on the upcoming royal baby.

Princess Eugenie baby: Residences in the UK of members of the Royal Family (Image: EXPRESS)

It read: “Her Royal Highness Princess Eugenie and Mr Jack Brooksbank are very pleased to announce that they are expecting a baby in early 2021.

Eugenie and Jack’s baby will be 11th in the line of succession to the throne.

Princess Eugenie and Jack got married at Windsor’s St George’s Chapel in October 2018.

Eugenie and Jack aren’t the only royal parents waiting to welcome a baby into the world.

In late 2020, Mike Tindall announced during the rugby-focused podcast he co-hosts his wife Zara is expecting their third baby.

Mike, who is the father of Mia and Lena, joked about the newborn saying: “I’d like a boy this time, I’ve got two girls, I would like a boy.