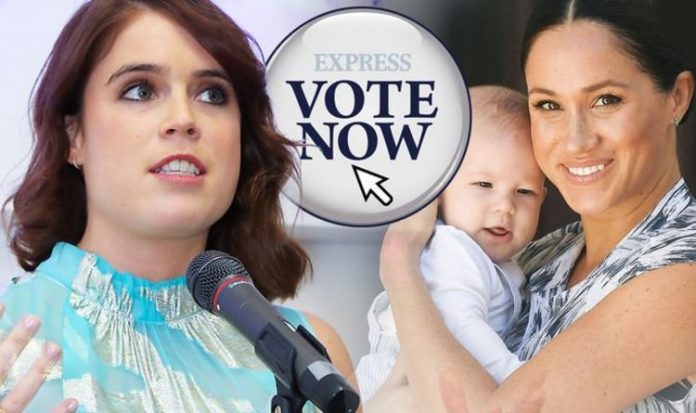 Princess Eugenie and her husband of two years Jack Brooksbank have announced last week they are expecting their first baby. The loved-up couple unveiled their happy news a week ago by simply publishing the picture of a pair of adorable baby slippers alongside a picture of themselves smiling.

On the same day, Buckingham Palace had issued a more formal statement reading: “Her Royal Highness Princess Eugenie and Mr Jack Brooksbank are very pleased to announce that they are expecting a baby in early 2021.

Much is unknown about Eugenie’s pregnancy beside her due date being in 2021.

Similarly, it isn’t known whether her firstborn will have a royal title.

The child won’t be a prince or princess by birth due to the letters patent issued by King George V in 1917, which established only a restricted number of people close to the throne have the right to an HRH style and royal title.

The statement read: “The grandchildren of the sons of any such Sovereign in the direct male line (save only the eldest living son of the eldest son of the Prince of Wales).”

However, the Queen could decide to offer Eugenie and Jack a title for their baby as a present.

One family friend has claimed the couple would likely turn down this offer, seeing a royal title as a “curse”.

They told Vanity Fair: “Even if the Queen offered them a title as a gift, it’s not Eugenie or Jack’s desire for their child to have a title.

“Eugenie knows that a title can be a curse as well as a blessing and she and Jack want their child to live an ordinary life and eventually work to earn a living.

Eugenie and Jack would not be the first couple to turn down a similar offer by the Queen.

Princess Anne decided not to give her children, Zara and Peter, titles.

Speaking to Vanity Fair in May, the royal said she believed her children would be “better off” without this privilege.

Princess Anne’s decision was hailed by the Queen’s former press secretary Dickie Arbiter as a “masterstroke”.

He said: “It was a masterstroke of the Princess Royal when she decided not to give her children titles.

“Growing up as a commoner allowed Zara to thrive as her own woman, and there has never been pressure on her to conform.

“She has benefited from it in all sorts of ways.”

Indeed, Zara grew up to become an Olympian, winning a silver medal at the 2012 London Olympics and is renown for her charitable work.

Similarly, Meghan Markle and Prince Harry, who received the titles of Duchess and Duke of Sussex upon marrying in Windsor in May 2018, decided to turn down the offer to give their son Archie a royal title.

Archie could’ve taken Earl of Dumbarton, one of Harry’s own titles and what he’s known as in Scotland, or the title of Lord.

However, not having a title, will grant Archie a life as normal as possible and protect him from the media scrutiny and the public eye.

It will also allow the little Sussex to forge his own path and career, much like Zara and Peter Phillips have done.