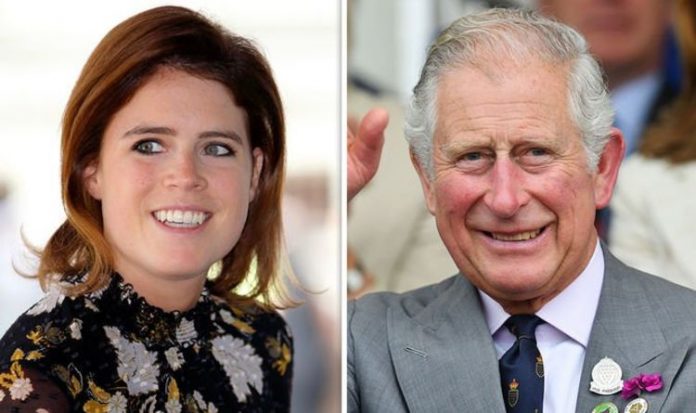 Eugenie gave birth on Tuesday with her husband Jack Brooksbank by her side at The Portland Hospital in London. The Royal Family announced that the Queen, Prince Philip, Prince Andrew and Sarah, Duchess of York were all “delighted”. Eugenie posted on Instagram an adorable black and white photograph of her baby’s tiny hand along with hers and Jack’s, and captioned it with three blue hearts.

She has not yet announced the name of her son, but there is a lot of speculation among royal watchers.

Betfair have released the latest odds for what she will choose, with Henry coming in at joint 4th with a 7/1 chance.

If Eugenie does choose Henry, she might have got the inspiration from Prince Charles and Princess Diana’s choice 36 years ago.

Prince Harry’s full name is Henry Charles Albert David, but he has been known as Harry since he was born.

Newspapers from just days after he was born referred to the royal as Prince Harry.

It would not be the first time, a York has taken inspiration from another royal; it is believed Prince Andrew and Sarah, Duchess of York, credited Queen Victoria’s choice for her daughter’s name when they named Eugenie’s sister Beatrice.

Topping the list of possible names is Philip, the name of his great-grandfather Prince Philip, Duke of Edinburgh, which is at 10/3.

Coming after Henry is Thomas on 9/1 and Edward at 10/1, a traditional family name which would match his great-uncle Prince Edward and his great-great-great-great grandfather King Edward VI.

Betfair spokesperson Sam Rosbottom said: “As we eagerly await the name of Princess Eugenie and Jack Brooksbank’s first born son to be revealed, there have been some changes in the betting market in the past day.

“Philip is still seeing a lot of love and has got even shorter at 10/3, with royal fans anticipating him being named after his great-grandfather ‒ but all eyes are on the emergency of Oliver into the market from nowhere straight into 4/1 second favourite, causing the likes of Arthur and Godfrey to drift in the betting.”

However, one part of his name that will be for sure is that he will have the surname Brooksbank after his father.

He will not possess the title of Prince, His Royal Highness or indeed any other title.

This means grandchildren in the female line are not entitled to HRH.

The Queen can dish out courtesy titles by offering the husband of female descendants a dukedom or earldom, meaning their children would have the titles appropriate for the child of a duke or earl.

However, Eugenie’s husband Jack has not accepted such a courtesy title and so his son will not have one either.

Eugenie and Jack appear to be following in the footsteps of other royals in this decision, such as Princess Anne and her first husband Mark Phillips, who declined a courtesy title.

Similarly, Prince Harry and Meghan Markle’s son does not have a title, despite being entitled to one as the son of a Duke.

Eugenie has moved back into Frogmore Cottage after giving birth and has formed a support bubble with her parents Prince Andrew and Sarah Ferguson, who live just around the corner.

During the later stages of her pregnancy, Eugenie moved into the Royal Lodge so she could spend time with them within the coronavirus lockdown rules.

However, households with a child under one are allowed to form bubbles with another household, so she is free to return to their home.

Frogmore Cottage was originally supposed to be where Meghan and Harry would raise Archie, but the couple stepped down as senior royals and moved to the US.