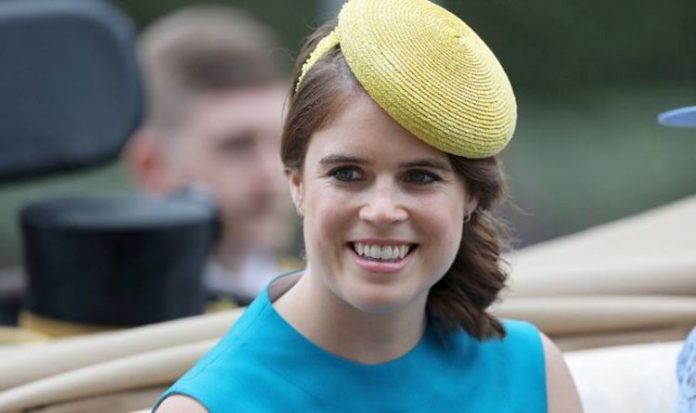 Eugenie seemed in good spirits in a video appearance filmed in her home of Ivy Cottage, located within Kensington Palace’s grounds. Her and Mr Brooksbank will soon move to Frogmore Cottage in Windsor which was once Prince Harry and Meghan Markle’s home before they moved to the United States.

The rare video appearance features the Princess sitting in her living room as she thanks the Salvation Army for their food distribution efforts.

The room she is in features contrasting colour schemes with a fuchsia cushion and a pink painting paired with grey cushions and a neutral wall.

In her short speech, Eugenie praised the Salvation Army and highlights the importance of its work throughout the coronavirus pandemic.

She said: “I had the great privilege of visiting both a Salvation Army food distribution hub and a safe house year where I got to see their incredible staff in action.

“In response to COVID-19, Salvation Army staff have worked tirelessly to help people in need.

“That includes rolling out one of the largest food distribution services in their history.”

Royal fans recognised Eugenie’s background from a video filmed by the Duke of Sussex in collaboration with Ed Sheeran to mark World Mental Health Week in October 2019.

Eugenie’s video message as she prepares to move to Frogmore Cottage while Meghan Markle and Prince Harry are in California.

“I don’t think that they’re paying rent which is interesting. I’ve seen a couple of reports of that.

“I think where it seems logical for me, the pandemic must have thrown such a wrench into things. Especially when you’re about to welcome a baby.

“Originally they were at Kensington Palace but I think logistically this all seems a smart a decision as we all relocate during this pandemic.”

“If they are staying in one part of the house and Harry and Meghan come back from California and want to stay, I’m sure there is a wing of rooms for them.”

Mr Ship said: “The thing we don’t know about this is quite how the financial arrangements are between Eugenie and Jack and Harry and Meghan.

“It could be ‘have it on us’ because we’ve got this nice big Netflix deal. Or it could be ‘please pay us whatever pounds per month’. So this arrangement is going to be quite interesting.”