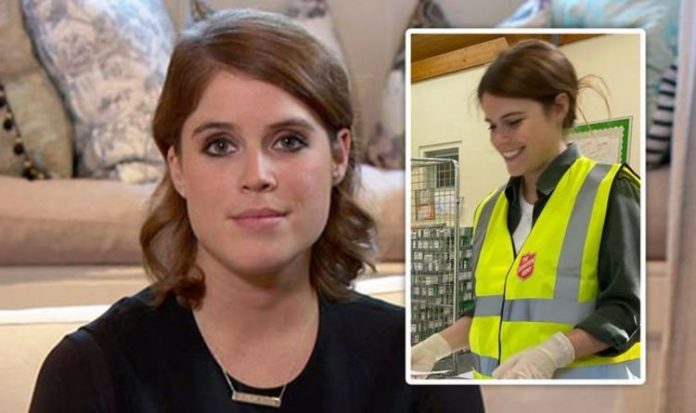 Eugenie, along with Anti-Slavery Collective co-founder Julia de Boinville, donated gifts to the Salvation Army and handed them out personally to residents of their shelter home. The Salvation Army has 182 units of accommodation provided to those in need. A tweet from the charity thanked the pair for their kind gesture.

The Salvation Army posted pictures of the stack of presents from the pair, as well as showing a signed message from Eugenie and Julia.

Their message, addressed to a safe house resident, read: “Thank you for welcoming Eugenie and I into our home earlier this month, and for sharing your stories so openly.

“You inspire us to keep fighting against modern slavery, and we have you in out hearts and minds every day.”

The charity said on Twitter: “This Christmas safe house residents were delighted to receive gifts from Anti-Slavery Collective founders HRH Princess Eugenie & Julia de Boinville containing crafts & other activities to help with their well-being as they stay safe and continue to recover from their experiences of modern slavery.”

On October 18 last year, Eugenie and Julia met with survivors of modern slavery and Salvation Army staffers at one of the charity’s safe house.

The pair were gifted plant pots made by the survivors, as well as hearing their stories.

Emilie Martin, Head of Operations for Anti Trafficking and Modern Slavery at The Salvation Army. Said at the time: “The visit gave our residents and staff a tremendous boost.

“Awareness and understanding are key to tackling modern slavery, so we are also delighted with the opportunity it provided to raise the profile of this important issue more widely.”

Eugenie and her husband Jack Brooksbank also secretly volunteered for the charity in May last year.

The Princess posted a series of pictures on Instagram showing the couple packing boxes at the Salvation Army’s warehouse.

She wrote: “Since 1865 the Salvation Army has been there with open doors to help so many people.

“In the past few years I have witnessed first-hand their dedication and hard work, so when they invited Jack and I to their newly created hub to pack boxes, we jumped at the chance.”

Eugenie is expecting her first child with Mr Brooksbank soon, after the royal announced her pregnancy in September 2020.

She wrote on Instagram “Jack and I are so excited for early 2021” on a photo of her and her husband holding up a pair of baby slippers.

A tweet from the Royal Family account at the time said the couple was “very pleased” to announce the news.

The account added: “The Duke of York and Sarah, Duchess of York, Mr and Mrs George Brooksbank, The Queen and The Duke of Edinburgh are delighted with the news.”