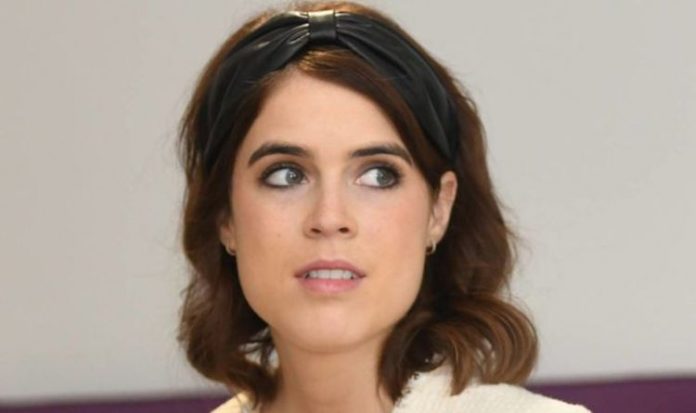 The Queen and Prince Philip’s ninth great-grandchild was born on Tuesday at the Portland Hospital, in central London, weighing 8lb 1oz. Eugenie and her husband Jack Brooksbank have yet to reveal what their son will be called as they settle into their new life as parents. But royal expert Daniela Elser warned Eugenie against picking an unusual name such as “Eustace” to avoid any controversy with the palace.

She wrote in NZ Herald: “In the coming hours and days, it is likely that Buckingham Palace will release some sort of charming official shot of Eugenie, Jack and their baby, along with announcing the little one’s name.

“There will be a surfeit of cute and heart emojis galore and not a skerrick of a controversy unless the couple name the tot something like Rocket or Cosmo or Eustace.

“Here is one last, fun, game of pretend to play: The expressions of the official Buckingham Palace gift shop staffers as they try to keep a straight face as they slap ‘Onyx’ or ‘Abner’ on some overpriced porcelain baby souvenirs.”

The proud parents posted a sweet black and white photo of their hands cuddling the fingers and wrist of their baby son yesterday.

Princess Eugenie has been warned over her baby name announcement (Image: PA)

The post received more than 60,000 likes just a few minutes after going live.

Buckingham Palace said the Queen and Philip were delighted at the news, along with Eugenie’s parents the Duke of York and Sarah, Duchess of York, who have become grandparents for the first time.

The palace announced Mr Brooksbank was at his wife’s side for the birth, before adding: “Her Royal Highness and her child are both doing well.”

The Prince of Wales and the Duchess of Cornwall posted their congratulations on social media, as they said: “Congratulations to Her Royal Highness Princess Eugenie and Jack Brooksbank on the birth of their son.”

Meghan Markle and Prince Harry are reported to have privately congratulated Harry’s cousin and Mr Brooksbank as they are currently thousands of miles away in California.

Harry has always been known for being close to Eugenie and they even enjoyed skiing holidays together as children with their families in the 1990s.

The Duchess of Sussex also had her son Archie at the exclusive Portland Hospital.

The happy couple tied the knot in October 2018 (Image: EXPRESS)

Eugenie was also born there and so was her older sister, Princess Beatrice.

Eugenie’s own name was an unusual choice that took everyone by surprise when she was born in 1990.

It was inspired by one of Queen Victoria’s granddaughters, Victoria Eugenie of Battenberg and is pronounced “Yoo-junnee”.

The princess is said to often go by the nickname of “Euge”.

The baby is 11th in line to the throne, meaning the Queen and Philip’s youngest son, Edward, Earl of Wessex, who was third in line when he was born in 1964, has moved down to 12th place in the line of succession.

“It’s obviously a name which carries a lot of royal tradition so it is no surprise that it is the favourite ahead of the likes of Arthur and Oliver.”

Eugenie already has a cousin James, who is Prince Edward and Sophie, Countess of Wessex’s 13-year-old son, Viscount Severn.

Betfair spokesman Sam Rosbottom said: “Royal punters are backing them to name their new bouncing baby boy after his great-grandfather.

“Philip was 25-1 but is now 4-1 favourite, having been slashed overnight.”