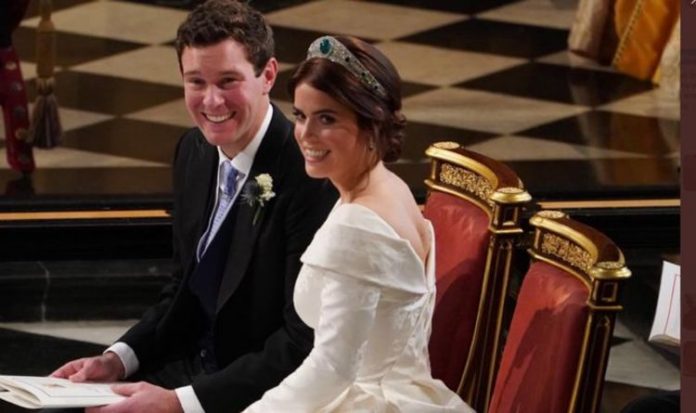 Princess Eugenie welcomed her first child into the world shortly before 9am at The Portland Hospital, London. Buckingham Palace confirmed the little tot weighs 8lbs 1oz and her husband Jack Brooksbank was present at the birth. The Queen 94, Prince Philip, 99, and both grandparents are “delighted” at the new arrival into the family, the palace said.

In a statement, the Palace added: “Her Royal Highness Princess Eugenie was safely delivered of a son today, February 9 2021, at 8.55am at The Portland Hospital. Jack Brooksbank was present.

The touching black-and-white photo also featured a caption of three blue love hearts and has already been liked more than 125,000 times.

Royal fans rushed to congratulate the couple, one user wrote: “Ahhh welcome to the world little one!! Congratulations to the happy couple.”

A second added: “So sweet. Congratulations!!”

Meanwhile, a third commented: “Congrats to you both on your little boy.”

The new royal baby becomes the Queen and the Duke of Edinburgh’s ninth great-grandchild, while Prince Andrew and Sarah Ferguson become grandparents for the first time.

The little tot is automatically 11th-in-line to the throne – knocking Prince Edward into 12th position respectively.

As things stand, the newest member of the Royal Family will not become a HRH or have a royal title.

Jessica O’Reilly of Ladbrokes said: “Huge congratulations to Princess Eugenie and Jack Brooksbank on the birth of their son.

“The early betting is pointing towards a traditional name like Arthur for Eugenie and Jack’s son.”

She added: “However, given Eugenie’s name we can’t rule out something a little more out-there such as Tarquin or Humphrey.”

Eugenie and Jack got married in October 2018 and confirmed they were expecting their first child together last Autumn.

After announcing her pregnancy in September, Eugenie shared a photo on Instagram of a pair of baby’s teddy slippers and wrote: “Jack and I are so excited for early 2021…”

A close friend to the couple later shared the baby was due in “mid-February” but an exact due date was never officially confirmed.

Eugenie‘s baby is not the only royal baby due in 2021, her cousin Zara is expecting her third child with husband Mike Tindall later this year.