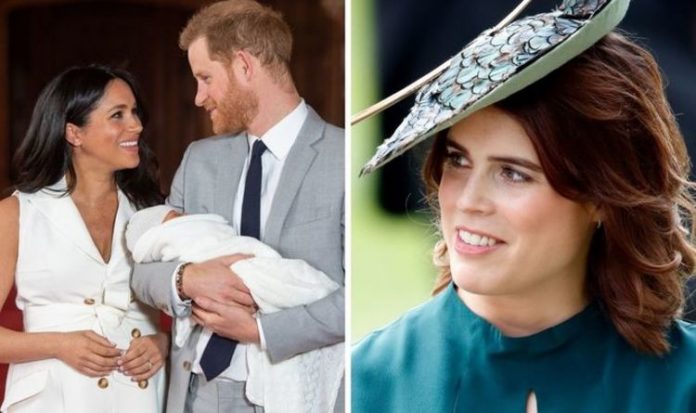 Eugenie and husband Jack Brooksbank announced earlier this year that they were set to welcome their first child together in 2021. Since the statement, speculation regarding how the baby will be brought up under the glaring spotlight shone on one of the world’s most famous families has been fierce. The child will be 11th-in-line to the throne, behind Eugenie, and auntie Princess Beatrice, meaning he or she will be able to enjoy a life further away from the attention given to other, more senior, royals.

And, according to royal expert Marlene Koenig, Eugenie is determined to ensure the youngster has a “private life”.

This is a similar wish that Meghan and Harry, who Eugenie is known to be extremely close to, have for their first son Archie, who they want to have a “peaceful life”.

So Eugenie’s choice appears to endorse the Sussexes’ move to grant Archie a less media-dominated upbringing.

Speaking to Express.co.uk, Ms Koenig said Eugenie would be in a better position to ensure her child was out of the spotlight as the “baby will be a great-grandchild of a sovereign, not even a grandchild of the sovereign”.

Reports show that Eugenie has remained close with Harry, even after he split away from senior Royal Family duties in January in order to lead a “financially independent life” in the US with Archie and Meghan.

They have remained in contact, and recently the Sussexes gifted Eugenie and Jack the keys to Frogmore Cottage, which the latter stayed in for around six weeks before moving on.

Part of this decision, Cosmopolitan suggested, was an extension of Eugenie and Jack’s wish for privacy around their child, with a friend adding this was another reason – like Harry and Meghan – she opted to turn down the chance of giving the baby a royal title.

They said: “Eugenie knows a title can be a curse as well as a blessing, and she and Jack want their child to live an ordinary life and eventually work to earn a living.

Other similarities between Eugenie and her older cousin Harry were also notable in 2018, when both married their fiances in spectacular weddings.

And that year Eugenie appeared to take a leaf out of her eco-warrior cousin’s book when she made a bombshell move on her wedding day and ensured the event was plastic-free.

Harry’s thirst and enthusiasm for ensuring climate change is tackled, mirrors that of his father Prince Charles, who uses his profile to raise concerns that scientists and experts within the field have.

The Duke of Sussex has also regularly spoken at events, raising the issues and awareness on the topic.

Eugenie made the admission while speaking to Vogue ahead of her wedding about how she feels on the topic of climate change and plastics.

She explained: “At the moment I’m picking up the mantle of anti-plastics, so I work with Project Zero which has just partnered with Sky Ocean Rescue.

“My whole house is anti-plastic now. Jack and I want our wedding to be like that as well – we’ve got to look after this planet.”

Princess Eugenie and Jack Brooksbank will have a baby next year (Image: GETTY)

Their bond was also discussed in the now-infamous biography of Harry and Meghan Finding Freedom, which saw authors Omid Scobie and Carolyn Durand claim Eugenie “had always been more than just a cousin to Harry”, adding: “They were also the closest of friends.

“Like Harry, Eugenie is loyal, honest, and great fun. The two had many nights out together in London.”

Even on the topic of relationships itself, Harry “had always confided in his cousin” because he “trusted her implicitly”, the book said.

Finding Freedom was published by HarperCollins and can be purchased here.