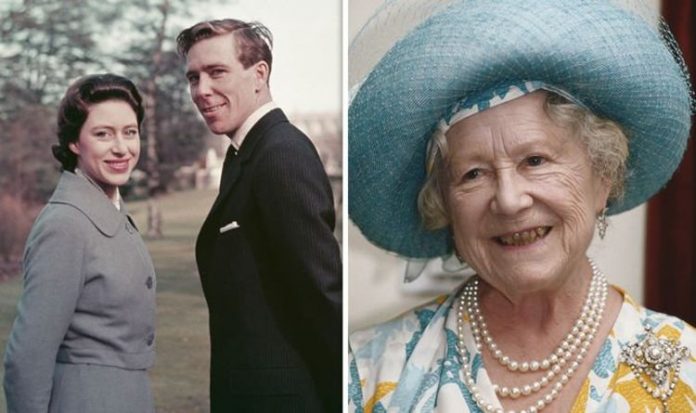 Margaret, the Queen’s younger sister, led a tumultuous life ‒ as explored by this evening’s documentary ‘Princess Margaret: Queen of Mustique’. As the so-called “spare”, she was the subject of royal scandal on numerous occasions ‒ not least because of her notable romantic escapades. The Caribbean island of Mustique is where her marriage to Antony Armstrong-Jones fell apart after she was pictured on the beach there with lover Roddy Llewellyn. But this was just one of many romantic scandals that befell Margaret in her often-chaotic royal life ‒ and, years before, her proposed match-up with Armstrong-Jones was not without controversy.

The couple married in 1960 and their union was deemed scandalous in aristocratic circles due to the class difference between the bride and groom.

Before tying the knot, the princess kept her love affair with the photographer secret from all but her closest friends.

But the Queen Mother, with whom she shared a home at Windsor’s Royal Lodge, was trusted with the prized information.

She wrote: “Margaret, accustomed to unquestioning deference, had never met anyone like him.

“She decided that she wanted Tony in her circle, and after a while his face could be seen among the parties of six or eight people in which the princess went to the theatre or dined out.

“As he was not a known escort, no one paid any attention to the appearance of an extra man in her wide and varied acquaintance.

“Soon she began paying secret visits to his studio in Pimlico, London.

“Her car would drop her unobtrusively in the adjacent, parallel road.

“Dressed as anonymously as possible in a tweed skirt, sweater, and headscarf, she would slip down a small alley that led to the studio’s backyard – at the back, the basement was at ground level – and down the spiral staircase into the small sitting room where Tony would cook them a simple supper.

READ MORE: Princess Margaret’s bath photograph ‘not as depicted in The Crown’

“When the princess joined her mother at Royal Lodge, Tony would drive down to Windsor to see her.

“It was known he was building an aviary there, and the assumption was that it was for the Queen Mother.

“As the year drew on, another excellent excuse for visits was his commission to take the 29th-birthday portraits of the princess.”

Ms de Courcy also noted, in her 2009 piece for Vanity Fair, how the Queen Mother hosted a party for the smitten lovers.

Princess Margaret with Antony Armstrong-Jones in the Bahamas (Image: GETTY)

She added: “The bond between Tony and the princess was steadily strengthening, a fact acknowledged by the Queen Mother, who, unlike many others in the Royal Family, approved of him wholeheartedly – so much so that she gave a party for her daughter and the man Margaret now clearly loved.

“Ostensibly, this dance, at the end of October 1959, was to welcome Princess Alexandra home from Australia.

“Tony and Margaret, scarcely able to hide their feelings for each other, were finally asked by the Queen Mother to lead a conga up and down the staircases and through the rooms of Clarence House.”

Sadly for the couple, the Earl and Countess of Snowdon’s marriage fell apart just over a decade later.

In February 1976, a picture of Margaret and Llewellyn in swimsuits was published on the front page of The News of the World, as they holidayed together in Mustique.

In March that year, the Snowdons announced that their marriage had broken down and Margaret was denounced by Labour MPs as a “royal parasite”.

Their divorce was granted in May 1978, making Margaret the first senior royal since King Henry VIII to break off a marriage.

Before and after the Llewellyn affair, Mustique was where the princess felt most at home and able to be herself.

Channel 5’s ‘Princess Margaret: Queen of Mustique’ combines archive footage with insider testimony and expert interviews to find out what she really got up to on her Caribbean hideaway.

‘Princess Margaret: Queen of Mustique’ airs on Channel 5 tonight at 9pm and will be available for catch-up on My5.